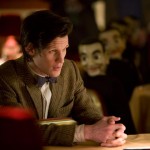 After the past three episodes, The God Complex had a lot to live up to and on first viewing, I wasn’t sure if I liked it. The set up just seemed a little strange. But on second viewing I think it’s a strong contender for my favourite episode of Nu-Who. It’s written by Toby Whithouse who wrote the second-series story, School Reunion and the fifth-series story, Vampires in Venice.

The hotel made for a creepy, atmospheric setting. It was even shot like a horror movie, with elements of the shining added. Visually it is spectacular; director Nick Hurran worked wonders with the setting like he did with the last episode, The Girl Who Waited.

Everything in this hotel screamed creepily. The framed photos on the wall added to this; not only did we see pictures of the current residents but also previous, including some past Doctor Who monsters: there was a Sontaran, a Judoon and a Tritovore.

Almost-companion Rita is brilliant but we’ve seen that set up before and knew she wouldn’t make it. It would have been a nice surprise for her to stay on and travel with the Doctor. Retcon please, Mr Moffat. Maybe Rita was a ganger?

The fear inside the rooms was a really intriguing idea; just what did the Doctor see behind door number 11? The Valeyard? Himself?

Also, what did Amy’s door number mean? 7th Nu-Who companion? Or did the door represent the age she was when she first met the Doctor? Or am I just over-thinking it?

It was interesting after last week to see how Rory had completely lost faith in the Doctor and could have effectively saved everyone by walking them through an exit.

Once again, we get echoes of McCoy’s manipulative, calculating Doctor in Smith’s portrayal. The scene in which he convinces Amy to lose faith in him was very reminiscent of the 7th Doctor and Ace in the curse of Fenric. I also felt that the monster was a reflection on the Doctor himself. We even get the Doctor having to make quite possibly the most grown-up decision he has made in the whole of his travels in space and time: he can see what he has done to Rory; he can see what he has done to Amy. The only thing that didn’t sit right with me is why have Amy and Rory stuck with him for so long? They’ve been through worse. Or maybe this wasn’t the reason but the catalyst for the Doctor to see things how they are.

I feel bad for writing this as the man has just swum 140 miles in sewage invested water for charity but I felt David Walliams was the weak link of the episode. It could just be that he is too famous and I couldn’t get past that to truly buy his portrayal as Gibbis. Which is a shame really as I know Walliams is a life-long fan of Doctor Who. He actually had my favourite line of the whole episode: “We’re lining all the streets with trees so invading forces can march in the shade.”

Overall it’s a great episode, sharp script, great acting and great directing and has made this half of the series four-for-four. Let’s just hope next week’s – Closing Time – makes it five-for-five.