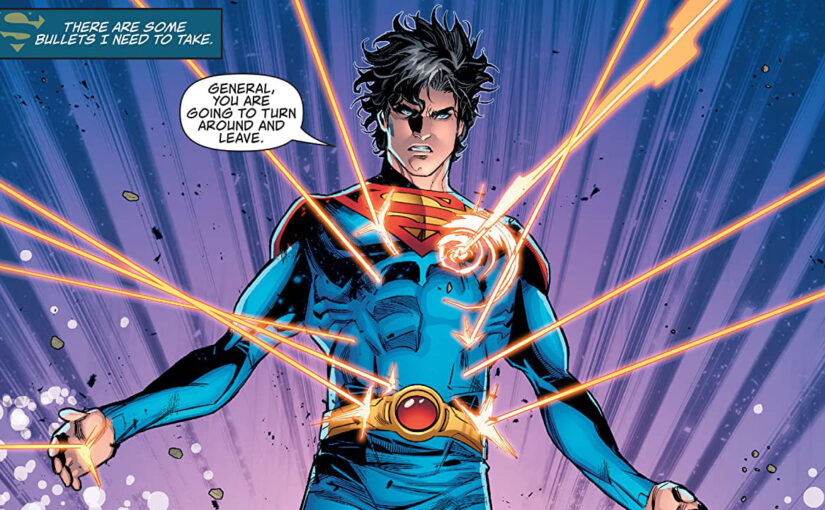 The DC multiverse has been blown wide open, following the shocking events in ‘Death metal #7’. A new and exciting future begins in Future State: Superman of Metropolis #1.

Due to extenuating circumstances Clark Kent has left Earth and has in-trusted its protection to his son, Jon Kent. Who is far too young for such responsibility, Jon feels the best way to protect Metropolis is to seal it up in a bottle and lock it away. Earning him the ire of its citizens, the military, and Supergirl.

In the bottled city heroes like The Guardian and Shiloh Norman (Mister Miracle) protect it from within, all whilst trying to find a way to break out of their new prison.

The first issue is really interesting because we’re just dropped into the events. Metropolis has been bottled for six months and is on the brink of collapse. The story is fresh, with very vibrant art from Cully Hamner. This feels very different from anything I’ve read before, which I wasn’t expecting. We’re given a fantastic exploration of the bottled city, six months in. The city is full of hate, rage, anger and fear. Reading this through the lens of this past year certainly adds to its impact. There’s always a sense the city could explode, at any moment.

Writer Sean Lewis has crafted a compelling story, with a young Superman completely out of his depth. Jon is no longer the happy-go-lucky kid we once knew, he’s older, jaded and cynical. He’s been given a huge responsibility and it’s absolutely crushing him. Lewis explores the mistakes a human with the powers of a God can make.