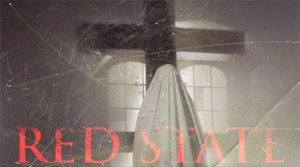 Three virgin high school friends think they’re on to a sure thing. One of them has found a woman online that will sleep with all three of them but they are soon caught in a trap by Pastor Albin Cooper and his Five Points Church. Albin Cooper is based on the real-life head of the Westboro Baptist Church, Fred Phelps.

Five Points protest at funerals with signs saying “anal penetration equals eternal damnation,” etc – Cooper believes that homosexuals are sinners and must be wiped off the Earth.  In its first half, Red State is almost a horror film. A gay man is murdered quite brutally and the three high-school boys are next.  However, halfway through it turns from a horror film into a shoot ‘em up action movie; the transition doesn’t really hurt the film.  What hurts is that the tension that Smith created in the first half completely vanishes in the second; it’s almost two different films. In the first half, Smith showed incredible restraint in not adding much comedy but in the second half, during the middle of the shoot out, characters start cracking jokes and asking for tea. Which is a shame, since the tension could have been cranked up a bit. By far the first half of the movie is the strongest part.

Red state is a massive departure for Kevin Smith. You could even argue that it’s his first grown-up movie. The visuals are stunning which is really impressive for Smith; he has never been known as a visual director.  He’s been criticised in the past for static camera setups and simple lighting but with Red State, Smith has created a style that works incredibly well. Shaky camera work is nothing new but it is a huge step forward for Smith. The film has no background music which really makes it more atmospheric; all we get is the sound of bullets and Cooper singing hymns.

This is easily Kevin Smith’s best work as a director. It’s something different and doesn’t feel like ‘a Kevin Smith movie.’ We are seeing him mature here but he seems to be lacking the confidence he needed for this. The introduction of Five Points isn’t handled in the best way. We learn about them in a classroom and it’s just too much exposition. John Goodman’s character exists only for exposition which is a waste of the actor’s talent.

Overall the film is good, it’s just not great. But it is great to see Smith break away from his comedy roots and try something a bit more ambitious. It’s a shame that he’s announced his next film, Hit Somebody, will be his last as Red State is such a huge step forward for him. It would be interesting to see what else he could come back with. Let’s just hope that Red State and Hit Somebody is such huge, global hits that he’ll change his mind and come out of retirement.