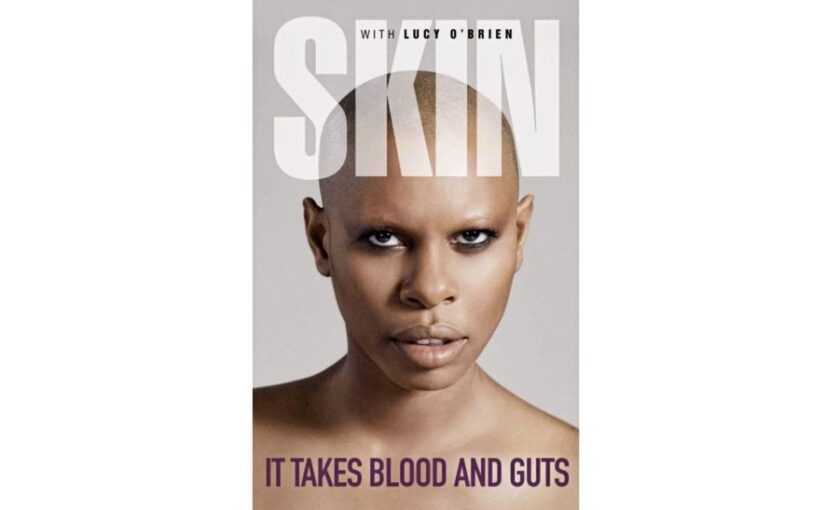 I’m a child of the Britpop era, I remember the summer of Oasis V Blur and all the bands that defined that generation. I was also a huge fan of Skunkanase, in this memoir. The pioneering frontwoman offers a very different take on generation X.

The melodic, passionate rock of Skunk Anansie’s first three albums sold 5 million copies worldwide. Even Rod Stewart covered Weak, on his 1998 album ‘when we were the new boys’.
When Stormzy tweeted that he was the first black British artist to headline Glastonbury, Skin rightfully corrected him. Skunk Anansie had done so in 1999, she also praised Maxim and Leeroy from the Prodigy, who were the headliners in 1997.

It’s safe to say that Deborah Anne Dyer AKA Skin has lived a life, and she accomplishes so much more with her book than simply providing a self-indulgent biography.
She’s analytical, critical, and mindful of her surroundings, as well as being acutely aware of the doors she’s opened for other young black British kids.

The harsh realities of being an openly bi-sexual black woman fronting a hard rock/alt-metal band were not avoided by Skin. She doesn’t shy away from the racism and sexism she’s faced in this capacity. Especially from some US record execs, that just couldn’t wrap their tiny little minds around a black alt-metal band. She also talks about how, with the support of her bandmates, allies, an amazing manager, and high-powered mates, she was able to shatter any misconceptions.

The real joy of this book is the peek behind the curtain we get to this era. Skin praises her friendship with Robbie Williams, who once angrily confronted Russian bouncers who wouldn’t let her in a club. As well as how a visit to her school, by Dame Judi Dench helped Skin find her inner voice.

The book isn’t a perfect read, it’s co-written by Lucy O’Brien, the constant switch between voices is notable. I would have rather had one voice, or maybe a transcript of a conversation between O’Brien and Skin, something akin to watch Benjamin Cook and Russell T Davies did with a writers tale, would have really suited this book.

All-in-all, this is an interesting tell-all about a generation and those who defined it.

It takes blood and guts is released in paperback on, 16th of September, 2021.