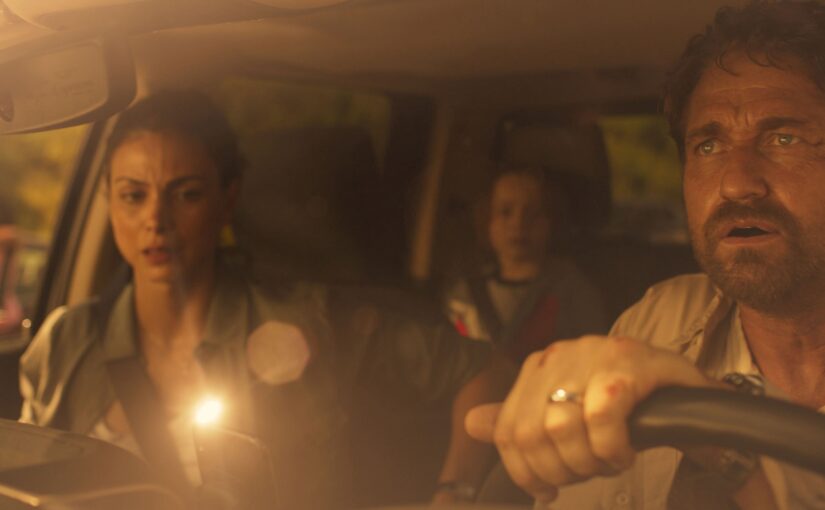 If you’re in the mood for a distraction from COVID-19, or 2021. Then perhaps a world-ending disaster movie is just what you need.
I’ll admit, I laughed when I first saw the trailer. I remember the day well. I’d gone to see Tenet with my fiancée, and my best friend. This trailer came on and the three of us erupted with laughter. It looked awful. It looked like a paint-by-numbers, generic Gerard Butler disaster movie. This is a disaster movie, but one that may surprise you. It certainly surprised me, now. It’s not a great film. But it is far better than the trailers made it look.

John Garrity (Gerard Butler) is a Scottish structural engineer living in Atlanta, Georgia with his estranged wife, Allison (Morena Baccarin), and their diabetic son, Nathan (Roger Dale Floyd). He returns home from work to reconcile with his family and prepare to host a party with their neighbours to watch the passing of a recently-discovered interstellar comet, named Clarke.
Whilst on a trip to the supermarket, he receives a Presidential alert inviting him and his family to be evacuated to Greenland. He returns home, gets his family and they head to the airbase. However, on arrival, they discover Nathan’s diabetes excludes him from being allowed on the plane. After some confusion, the family get separated and we follow them each, as they head to Allison’s father’s house. Then try to make their own way to Greenland.

The story ditches the normal end of the world cliches and instead, plays around with themes of human survival. This slightly different take can make for some immersive and uncomfortable viewing. The family encounter people who are terrible, people who are opportunistic and, people who will go above and beyond to help. This leads to a very realistic feel to proceedings, which oddly reflect the very early stages of the Covid outbreak. You know, when you couldn’t buy toilet paper?

As I said earlier, the trailer is slightly misleading. Some might find this a slow burn. Perhaps the fact we’ve all just experienced a global crisis, which has shown the best and worst of humanity, made me project more onto this film than I would have otherwise. However, I was pleasantly surprised and found it to be a more nuanced take on the genre.