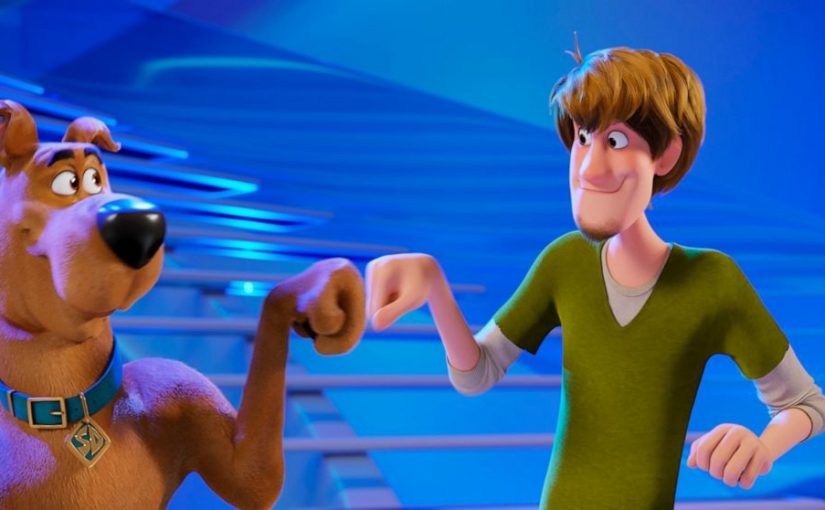 Scoob! Had been in development at Warner Bros, for about six years. It made headlines a year or so ago, when long-time Shaggy voice actor, Matthew Lilliard revealed on Twitter that he hadn’t been asked back. I can’t help but feel that he missed a bullet here.

Scoob! suffers from the same fate as Universal’s ‘Dark Universe’ and Sony’s ‘Amazing Spider-Man-verse’. In both instances, the studios tried to launch an entire universe. Before establishing one solid film.
This film also has the chore of re-introducing the world to everyone’s favourite ghost hunting adventurous, whilst setting up the wider Hanna-Barbera universe. Such as; the Blue Falcon and Dynomutt, Captain Caveman, and Whacky Racers. The film also went through several creative-team switch-ups and a major theatrical-release shift, moving from September 2018 to May 2020 and then, well. You know what happened in May 2020.

The animation is incredibly well done. Director Tony Cervone, was clearly inspired by the colourful nature of the original cartoon series. The actors all bring their A-game. Will Forte makes a great Shaggy. As always, Frank Welker is great as Scooby-Doo. However, the weak plot and shoe-horning of Hanna-Barbera properties really let this film down.