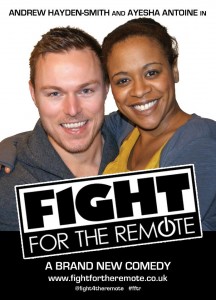 Fight for the remote is a new audio sitcom from Fantom Films.

Jon (Andrew Hayden-Smith) and Alice (Ayesha Antoine) are a couple in their late twenties living together in London. Alice is ambitious while Jon is happy with his place in life.

This sitcom will strike a chord with anyone in a long-term relationship. On a Friday night, I often have the pizza/kebab chat that Alice and Jon have near the start. At times I actually felt as if the writers, Julia Dawn and Mark Adams, had hidden a microphone in my living room and just transcribed what they heard.

Jon and Alice have friends that help guide them on their journey. Jon has married-Dave (Daniel King) as his sex-obsessed best friend (we all have one of those) and Alice has her man-chasing friend and work colleague Karen (co-director Helen Oakleigh). The performances are great all-round; even the supporting characters get really great lines. The cast was clearly having a great time whilst recording.

We’re introduced to Alice’s mother (Ellen Thomas) via telephone.  She’s a Hyacinth Bucket type that doesn’t believe Jon is good enough for her daughter and feels he is a bad influence that will lead her towards “partaking in the wacky-baccy.”

The thing that makes Fight For The Remote so great is that it is so universally recognisable. Anybody with a live-in partner will instantly identify with the situations and characters; I saw a lot of myself in Jon.

The writers have managed to capture the essence of the long-term relationship perfectly. The script is sharp and well written. It effortlessly manages to bridge together the bigger issues and challenges that couple’s face with the smaller, more trivial subjects such as Deal or No Deal. From the title of the episode, you can guess it’s adult humour which deals with sex, frustration and love. Overall this is a genuinely funny comedy that deserves a lot of success.