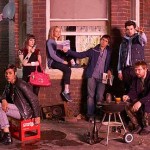 Channel four recently ended their contract for syndication rights to ‘Friends’ which has freed up a bit of money for them to invest in home-grown comedies. The first of which, is ‘Fresh Meat.’

It’s written by Jesse Armstrong and Sam Bain, who are the creative team behind Channel 4’s ‘Peep Show.’

The characters are the stereotypes we’ve seen a thousand times before:

Despite the stereotypical characters, there are some great moments: Howard begging a pub full of students for one-twentieth of people’s pint was genuinely funny. As was the post-sexual tension between JP and Josie.

The performances are great all round. The character of Oregon reminded me a lot of Daisy from ‘Spaced’ – I imagine that is exactly what Daisy was like at university.

The person who surprised me the most, however, was Jack Whitehall. Now, I’m not a Jack Whitehall fan; I don’t find him funny and, I’m not alone. To quote a friend, “He makes my piss boil.” But he worked well in this. Okay, he is playing a posh-cock so granted it isn’t much of a stretch for him, but he suits the narrative.

Even with the two-dimensional characters, I enjoyed ‘Fresh Meat.’ I think over time it will evolve into a decent comedy and a worthy replacement for Peep Show.