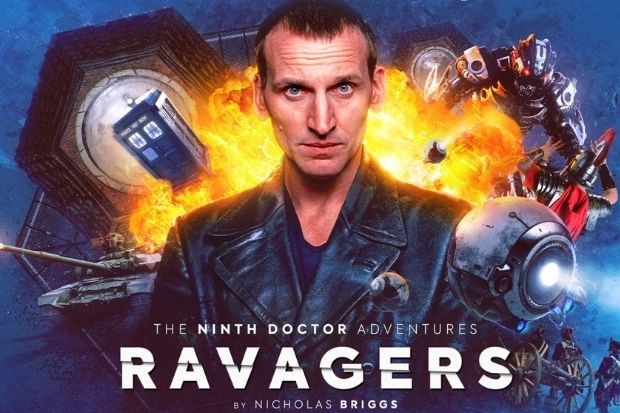 Let’s be honest. None of us saw this coming. This time last year, we’d have thought the announcement was a cruel joke. It seemed so unlikely. But Sixteen years after his thirteen episode run reignited the Doctor Who franchise and brought it into the consciousness of a new generation. Christopher Eccleston is back and it’s about time.

The Ninth Doctor Adventures – Ravagers, written and directed by Nicholas Briggs, is the first in a four-volume set of audio adventures.

I’ll admit, that I’ve struggled with this review. On one hand, Ravagers is an impressively ambitious set. Eccleston’s return is arguably the biggest coup Big Finish has achieved since Tom Baker returned in 2012. Billie Piper once said that when she was last in Doctor Who, she spent 3 hours looking in a mirror unable to find Rose. Eccleston doesn’t have that problem, he slips right back into character. It’s an utter joy to hear him back in the role that made me a Doctor Who fan. It’s like he’s never been away. The supporting cast is all outstanding, especially Camilla Beeput and Jayne McKenna as Nova and Audrey. Dan Starky puts in a fun performance as Marcus Aurelius Gallius. The music and sound design are flawless and match the pace of Briggs’ excellent direction. His love, passion and enthusiasm for this era of Doctor Who absolutely shines through. However, the biggest flaw is the plot. It’s a really decent 45-minute episode, stretched to 2hrs 30mins. On the bonus disc, Briggs talks about how he entered “several blind alleys” whilst trying to write this. What we end up with, is an amalgamation of various stories he couldn’t get off the ground and I think it shows.

We join the Ninth Doctor in the middle of an adventure and we work backwards, which I think is a risky move. Big Finish excels at non-linear storytelling, they do it a lot. But for many people, this would have been their gateway to the world of Doctor Who on audio. I consume a lot of Big Finish, (at least two full box sets a day) and even I, at times, struggled to keep up with the convoluted non-linear narrative. I found myself constantly rewinding a minute or two, just to see if I had missed something. At one point, I even thought I had started the wrong episode.

Overall, Ravagers is a bit of a mixed bag. I enjoyed the set, but I’d have prefered if they had gone with three individual stories. I’m excited for the future of this range.