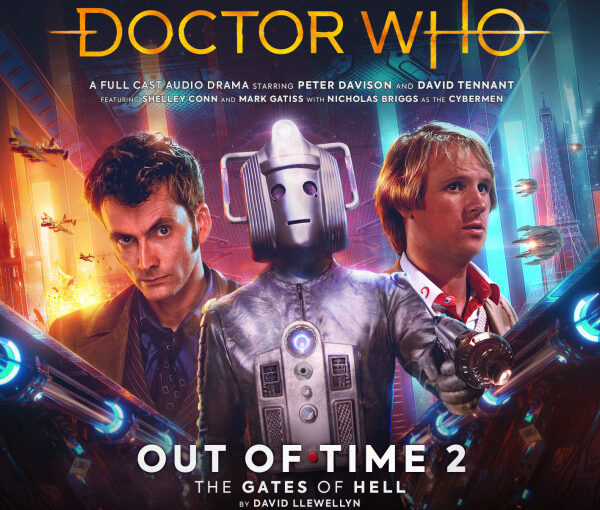 Out of Time 2 – The Gates of Hell is the second in a trilogy of specials, that sees David Tennant’s Tenth Doctor on a farewell tour before he regenerates. In the first audio, he bumped into Tom Baker’s Fourth Doctor. This time around, he’s paired up Peter Davison’s Fifth.

The story kicks off with The Fifth Doctor in Paris in 1809, he’s travelling sans-companion and decides to take a tour of the catacombs. It’s here that he bumps into a Time Agent Tina Drake (Shelley Conn), who for a very brief moment. I thought was Peri. Was that just me? Anyway, Tina is on the trail of a temporal paradox. Whilst in the catacombs, the duo trigger a trap, that sees the Doctor frozen in time.
In 1944, the Tenth Doctor is evading Nazis, in occupied Paris. Looking for a hiding spot, he finds himself in the catacombs, where he encounters his former self. When they return to the surface, they find Paris is overrun with Cybermen.

I was a huge fan of Out of Time and I think it’s safe to say, that this was my most anticipated release of the year. Not only are we getting a multi-Doctor story, but we’re also getting a Time Crash reunion and we’re getting an outstanding script from David Llewellyn.

The story is structured brilliantly and moves along at a swift pace. Whilst Llewellyn’s love for the Fifth Doctor shines through, this feels very much like a David Tennant era adventure. Ken Bently’s direction is smooth and matches the pacing beat for beat. Whist Howard Carter’s music and sound design help elevate the adventure even more.

The two leads have natural chemistry and bounce off each other well, there’s a lot of fun interplay between them.
I had a smile on my face the whole way through this, Lewellyn’s script is peppered with humour, call-backs and historical facts. This is quintessential Doctor Who.

Doctor Who: Out of Time 2 – The Gates of Hell is available on CD and download from Big Finish.