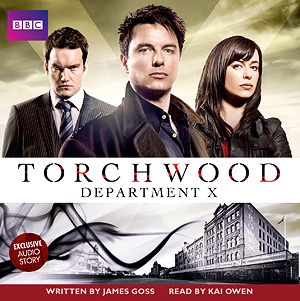 Department X finds the Torchwood team investigating the old Cardiff department store, GR Owen.
The team go undercover to determine why customers are disappearing.
It’s written by James Goss and Kai Owen is on vocal duty again. The style has changed for this audio, it’s no longer a first-person narrative, it’s more like a regular audiobook.

Now, this isn’t up to the high standard of the previous audio, Ghost Train, but it’s still extremely entertaining. Kai Owen does another brilliant reading, again capturing the essence of all the Torchwood team, as well as new characters, the musical stores and sound effects still work well.

This is a return to the Torchwood of yesteryear, it feels like a series 2 story, not as dark as children of Earth, but not as fluffy as series 1.

I imagine it’s the last time the Ianto Jones features in any Torchwood spin-off, as future adventures are more likely to be based, between children of earth and the new US format, or on the US format

You can get this audiobook straight from Audiogo, on cd or download for under a tenner, which is a bargain really.