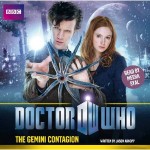 Now, only a week before the 2011 series of Doctor Who kicks off, the last Time Lord returns with this audiobook, read by Meera Syal, she played Nasreen Chaudry in the Silurians two-parter, from series 5.

Meera Syal gives us an excellent read, she manages to capture the essence of every character

It’s a very Douglas Adams story. I could imagine him writing this if he were still with us. The story focuses on a new anti-viral handwash Gemini, which has been laced with Meme-Spawn, a sentient microorganism which makes the user fluent in every universal language. Now, you may be thinking. Brilliant, how do I get some?

Unfortunately, the manufacturers didn’t think to test it on humans. Humans react badly to, Gemini –It makes them speak every language at once, with a violent urge to communicate. In come the Doctor and Amy, they land on an Earth-bound cargo-ship loaded with Gemini and with the crew already infected by the virus. Unable to escape the ship, and with Amy facing infection, the Doctor is faced with a conundrum: does he save Amy or the Earth?

The quality of this audio really impressed me. I started to wish that it was an episode of the tv series and not just an audio. It’s a gripping story, but there is one niggle. I don’t believe that the owner of the company, wouldn’t have tested It on human’s, before selling it to them. But, that is just a minor niggle.
Everything else about this story is enjoyable and, it’s under a tenner, which is cheap for a quick who-fix.

You can get this audiobook straight from Audiogo, on cd or download for under a tenner.