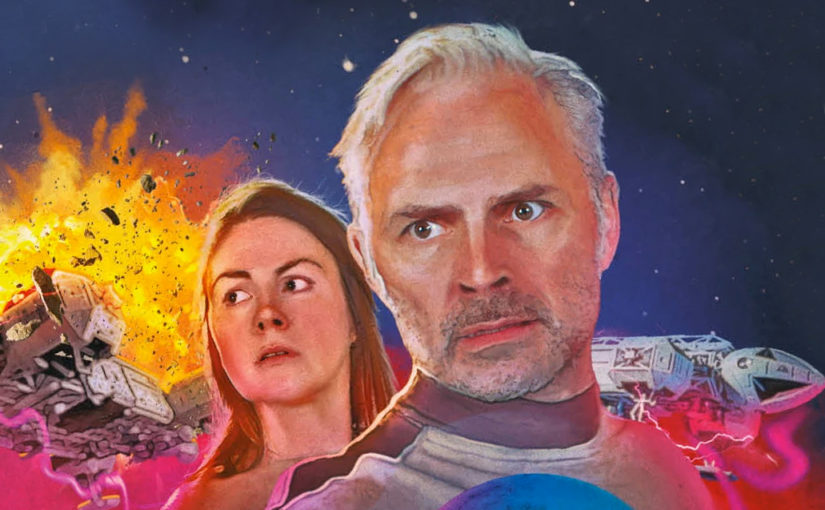 This is Wilf Base Alpha.

I cannot know if you will receive this message but I’ve just heard ‘Breakaway,’ the new Space: 1999 audio drama from Big Finish.

Why would they do this? This ‘reimagining’ of the TV programme from Gerry and Sylvia Anderson, who brought us the likes of Thunderbirds, Captain Scarlet and UFO. Twenty years to the day after the 13th of September 1999, when the events of the original 1975 series began.

The Andersons and producer Reg Hill were known for intricately beautiful miniature effects and stylish designs in futuristic adventures on the small screen, the sort of thing parents show their kids when when they want them to grow up to be engineers.

By the time Space: 1999 was broadcast they’d made some progress toward widening their audience, mixing their love of technology and thrills with some nice moments of humanity. But the programme remained primarily a visual spectacle.

Big Finish love stories, however, and this one’s worth bringing into the future. A cataclysm with dire consequences for all Humanity is played out on the eve of its first foray to a distant planet.

A mysterious and deadly illness strikes the pilots of Eagle transporters, spacecraft servicing space voyage preparations at Moonbase Alpha. The base’s chief medical officer Helena Russell is aided in her search for a cure by John Koenig, who flies out from Earth to take command of the lunar city. As the nature of the disease becomes apparent, the scope of their crisis expands to disastrous proportions.

Big Finish have invigorated the adventure with a better sense of pace (that’s not to say they don’t let moments hang where they should) and a refreshing emphasis on character drama. The delightful gadgets of the original ‘1999’ can still be heard in use – Eagles, Moonbase travel tubes and hand-held Commlocks – it’s just that a model-maker’s sort of skill is instead applied to the intricacy of the soundscape.

There’s an interesting use of music in this story. Beyond simply hinting and sweetening action in progress, composer Benji Clifford inserts brief musical interludes to excite us in tantalising moments, such as the retrieval of an escape pod containing an unidentified passenger. Fans of the original series will appreciate familiar melodies amid the score, in addition to a familiar but fresh version of the original theme tune.

The unique selling point of this audio drama is no gimmick: it’s obeisance to the fact that what happens with the characters is everything. It makes this speculative exercise of the imagination into something we respond to as if it were really happening. Eagle transporters are cool but the challenge of surviving one crashing is really where it’s at.

Commander Koenig is played by Mark Bonnar, an actor familiar to Doctor Who viewers as the working father Jimmy in The Matt Smith story Rebel Flesh and as the supervillian known as The Eleven, who besets Paul McGann’s Doctor in audio. Mark hails from Edinburgh and follows the likes of Hugh Laurie in delivering an American accent good enough to live in. His Koenig is very relatable; the pain of each challenge glows darkly over him but his endurance shines brightly.

Maria Teresa Creasey is a new name to many of us – California born and New York educated, she’s nonetheless been rolled into a variety of UK productions. The Dr Russell she plays here is refreshingly active in the way she squares off against the impossible situation presented. It allows us to get get a good sense of her character early on. Big Finish have assembled a good pair of leaders in Creasey and Bonnar.

This 2019 view of an imagined, futuristic past makes an interesting novelty. A particular ‘minced oath’ dropped by Helene is a few years out of date by our standards but it comes from a time far beyond 1975. It’s not too far off from 1999, though. It kept me on my toes as I speculated on what might and might not be possible for the inhabitants of this story’s world.

A contemporary zeitgeist captured here (and one of my favourite Anglicisms) is brinkmanship. Both versions of ‘Breakaway’ begin by hiding Moonbase’s dire situation from Koenig but here, the stakes are higher: crowds of the general public are on Alpha, unaware of the expanding epidemic of pilot illness. The administration on Earth responds to this by redoubling its efforts to cover it all up.

Writer/director Nicholas Briggs has sanded smooth a number of rough edges that marred the uneven TV pilot. Sci-fi’s best known writer Isaac Asimov famously had a go at the old series’ scientific implausibility. The fantastic catastrophe played out in audio presents us with a nice combination of nods to real science and plausible fantasy. This puts our focus back on the drama and adds weight to its consequences.

Flawed as it was, the old Space: 1999 sometimes captured the awe felt by those of us who remember the Apollo space programme. I can barely wait to hear how this new crew face the unknown because what we can count on is that the characters and situations here are in good hands.