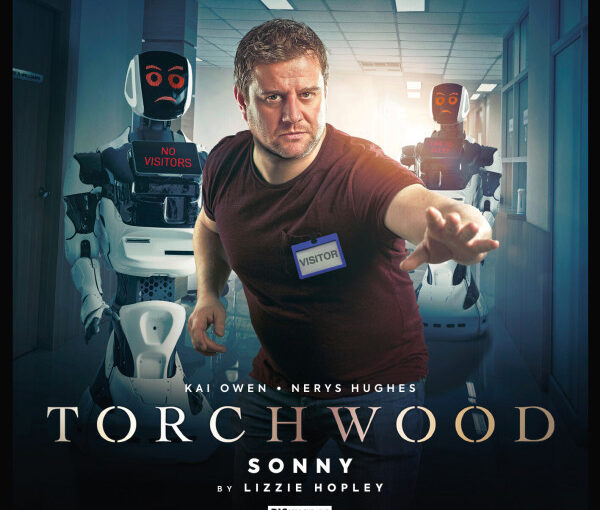 In just a few short years, Lizzie Hopley has cemented herself as one of the most consistent writers on the Big Finish roster. Returning to the Torchwood range for the first time since 2017, she gives us an interesting morality tale about care homes, loneliness, the treatment of elderly people and, the existential crisis of an AI.

Torchwood: Sonny follows fan-favourite Rhys (Kai Owen) as he enlists his mum, Brenda (Nerys Hughes) into helping Torchwood investigate a new fleet of robots, in a care home. At first, Brenda isn’t too pleased about this. But as time goes on, she becomes more and more dependent on her robot, named Sonny.

Kai Owen, Nerys Hughes, and Steven Kynman are all terrific, and their relationships are convincing from the start. We all know Hughes is a particularly talented actress, but she absolutely shines in this audio. She portrays Brenda with such a raw vulnerability, that feels like an emotional gut-punch at times. There’s a wonderful complexity to Brenda, that I hope we get more of in the future. The supporting cast is also exceptionally strong, with Amerjit Deu, in particular, doing a fantastic job as Prudeep.

Sonny is not only a brilliantly comedic script, it’s also a deep exploration of what it means to feel isolated. Hopley manages to convey the monotony of being in a care home, without the story being boring. Lisa Bowerman’s direction is flawless and keeps the story going at exactly the right pace, this is all beautifully accompanied by Steve Wright’s soundtrack.

I’ve said it before, but I think it bears repeating. Torchwood on Big Finish is Torchwood at its absolute best.

Torchwood: Sonny is available to buy from the Big Finish website.