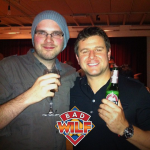 Kai Owen returns to talk to Martyn about his career, football and, of course, Torchwood: Miracle Day.