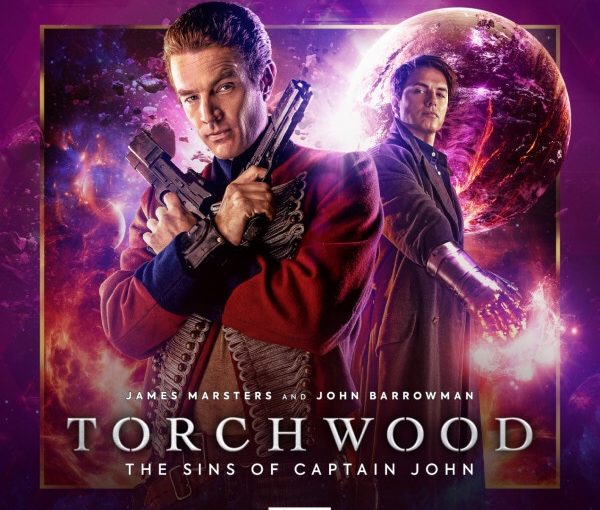 This release contains adult material and may not be suitable for younger listeners.

Torchwood: The Sins of Captain John is a four-episode story, with James Marsters clearly having the time of his life breaking the fourth wall, as the Whoniverse’s answer to Deadpool. There’s even a fun moment where he complains to director Scott Handcock, that he can’t hear the theme song.

Captain John is in Restoration England looking for some gauntlets. There’s intrigue in the Tower of London, the dead are walking the streets, and the severed head of Oliver Cromwell has a terrible warning.

Captain John is in a wooden space prison that’s under attack by a strange and terrible life form. Also the catering is truly dreadful and Dr Magpie’s latest discovery may have got a little out of hand.

Captains John and Jack find themselves stranded on a world that may be actual paradise – the weather is pleasant, the people are friendly, and the giant stuffed animals only come out at night. There’s only one thing the world is missing. No-one has ever explained to any of the population about the birds and the bees. Which is unfortunate.

Captain John arrives at the funeral of one of the galaxy’s richest men. He died without making a will, and his heirs have some very creative ideas about how this can be put to rights involving murder, necromancy and seduction. Sadly, Captain John is only too happy to oblige.

It’s difficult to believe that it’s been 12 years since we first met the swashbuckling Captain John. James Marsters clearly has a lot of affection for the character, as he absolutely shines in this. It’s great to hear him on his own adventures.

David Llewellyn’s script is fast and funny, with Scott Handcock’s direction matching it all the way. The supporting cast are also incredible, each one of them gives a memorable performance without outshining Captain John.

The Sins of Captain John is everything I hoped it would be and more. Roll on Volume 2.