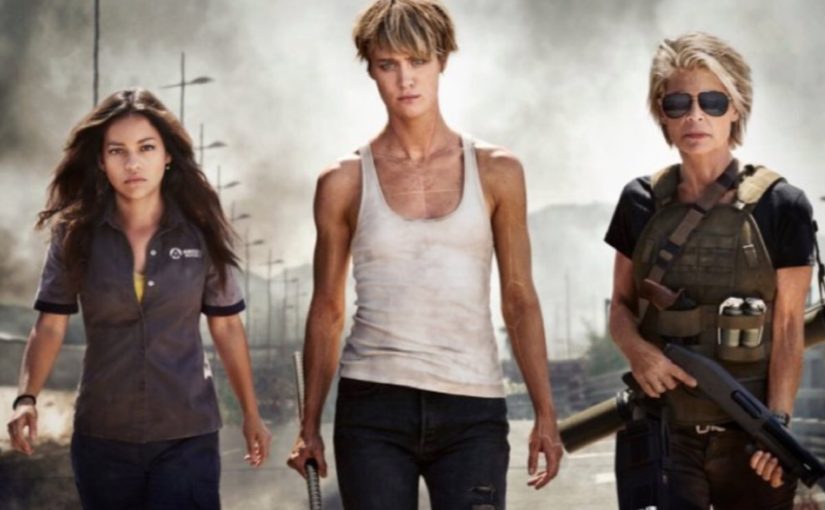 Finally, in 2017 the right reverted back to Cameron who acted as producer to this film, leaving the directing duties to Tim Miller (Deadpool). And this time, instead of focusing on John Connor, Terminator: Dark Fate follows his mother Sarah (Linda Hamilton) who is now older and battle weary. Her stare alone cuts through the screen with unwavering anger.

The main focus of this film is a young Mexican woman named Dani (Natalia Reyes). Dani is being chased by a new breed of Terminator, the Rev-9 (Gabriel Luna). Dani is being protected by an “enhanced” human from the future named Grace (Mackenzie Davis) who is able to trade blow-for-blow with a Terminator.

With Dark Fate, we get something of a reboot in terms of storytelling and in-universe continuity. Everything post-Terminator 2: Judgement Day, now exists in an alternate timeline that didn’t happen for these characters.

Dark Fate has a very different and interesting dynamic between the leads, even though she’s being protected. Dani isn’t a damsel in distress. She wants to fight, she knows she has to. She just doesn’t know-how. The film holds itself together pretty well, it respects its origins whilst building a new story. The action set pieces are fun and engaging, even if the CGI is a little dodgy at times.

Arnold Schwarzenegger also returns as another T-800-101 model and brings a bit more comedy to his role, than we normally see. He isn’t cracking jokes, but there are a few deadpan lines that break through the tension of the film.

The Rev-9 design is outstanding, easily the best Terminator we’ve seen since Robert Patrick’s T-1000. The Rev-9 is able to create a twin Terminator, to assist him with his mission.

Overall, I was really impressed by Terminator: Dark Fate. It’s a shame the audience has been burnt so many times by poor sequels, as this is more than a worthy successor for Terminator 2.