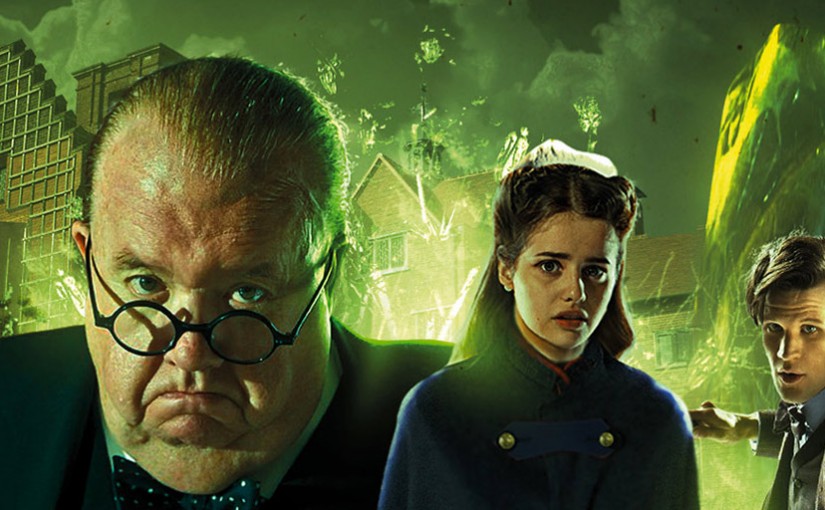 Reprising his performances during Matt Smith’s era of Doctor Who, Ian McNiece is back as Winston Churchill. Big Finish’s new box set departs from their well-honed format of unmediated aural adventures, with McNiece narrating as well as performing in each episode. The narration does cover a few bits that I felt it shouldn’t, notably an action sequence in the first story and the introduction of a famous historical figure in the third. I mention this to balance what I think has been a refreshing experience and a success overall.

Churchill’s narration includes recounting the words and actions of the first three new series Doctors. This has the brilliant effect of bringing the Christopher Eccleston Doctor to Big Finish, complete with the Ninth Doctor signature tune. The Doctor changes, the title music changes. Across the stories, one can spot the different speech patterns of each Doctor, even as related (and occasionally imitated) by McNiece.

There’s still plenty of full-cast audio action aboard, moved along nicely by the ‘companions’ of Churchill. As his new secretary, Hetty Warner (Emily Atack) leads many scenes apart from Winston and works well with both her employer and The Doctor. Kazran Sardick (Danny Horn) returns from Dr Who’s ‘A Christmas Carol’ and provides a good contrast to the 20th century way in which Churchill reacts to being dropped into Roman Britain. In the final piece, another supporting artist from a Matt Smith Christmas special returns, Holly Earl As Lily Arwell. She looks after Winston at a particularly action-packed point in his twilight years.

The first story is the most conventional, with an alien object dropped into wartime Britain. The second shatters that mould as we find Churchill’s Black Dog – his controversial mental issues – woven into the story. In the third, Winston lives amid the subjects of his own history books and the statesman’s fascination for butterflies is rolled rather surprisingly into the fourth adventure. Additionally, there’s a nice bit of Nick Briggs’ Dalek voice work in this set.

Doctor Who: The Churchill Years brought a delightful, fictionalised Sir Winston into my home over a couple of winter evenings. So pleasant was it that I might just sit down with Churchill’s own writing for just a bit more time with this true-life legend from long ago.