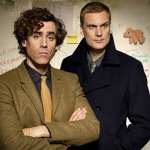 Aired just before the start of 2011, the late Douglas Adams’ novel Dirk Gently’s Holistic Detective Agency – and its sequel – were adapted as a television pilot. A number of liberties were taken but all served to drop a twenty-first-century freshness into the eighties stories. Steven Mangan’s intense, goofy performance of the dishevelled, slightly suspect detective was at the centre of this success; the programme’s outing on BBC Four earned itself a follow-up series handily.

With the novels entertainingly adapted, Howard Overman (creator of Misfits) set about spinning Adams’ franchise into a trio of fresh new mysteries. The first of these is more rewarding than many cinema films.

A certain Mr Edwards believes The Pentagon is trying to kill him. Not the building, of course, just some of the people who work there. Suddenly it’s spy satellites, earpieces, breath mints and dark glasses all over the place and Mr Edwards is dead before Dirk and his poor pal Macduff can get a word with him. Hm? Yeah, breath mints.

Doctor Who fans will find a refreshing take on the classic sidekick in Richard Macduff, played by Darren Boyle. Although Macduff is tasked mainly with reacting to Dirk’s manic crusading, Boyle makes an art of it and is given the chance to move from there into some rather amusing power struggles with his dodgy business partner.

The Fundamental Interconnectedness of All Things is a genius notion set inside a detective story and it’s part of why this series continues to delight. Once again we’re presented with a constant stream of bizarre nonsequiturs and its down to Dirk to put them together and perhaps get paid this time.

Star Steven Mangan has written an article on The Making of Dirk Gently.