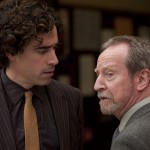 With Macduff at his side, Dirk returns to St Cedd’s College Cambridge, from which he was expelled years ago. He’s been invited back by Professor Jericho (Bill Paterson), who may have been the only man to ever truly believe in our clever con artist. Lights go out. Security cameras fail. The professor’s experimental robot vanishes.

This second episode of the series focusses more on its single campus setting versus the dizzying array of urban locations seen previously. It remains full of ideas, nevertheless: online gaming, artificial intelligence, internet protocols and microchip implants are just some of what’s in store.

After an episode’s absence, Helen Baxendale is back as Susan Harmison, GP and girlfriend of Richard Macduff. It’s a credit to actor and production that Susan is realised as well as she is; there’s an undergraduate whimsy to Douglas Adams’ writing and his female characters often suffered at the hands of time, space, causality and drunken male camaraderie. Televised Dirk Gently is fun for the whole campus.

For the Dirk novels, the late Mr Adams reused a few elements of Shada, his unbroadcast script for Doctor Who. Most notable among these are the St Cedd’s college setting and its surprising professor. Showrunner Howard Overman deftly avoids the strictly Doctor Who elements in his adaptation of the books and this episode’s writer, Matt Jones, lends a rather personal touch to the zaniness. The result is another cracking episode: it takes the series into virgin territory and shows that this team can succeed Douglas Adams instead of merely honouring him.