Origin movies are incredibly difficult to get right, for every Spider-man there’s a Daredevil. 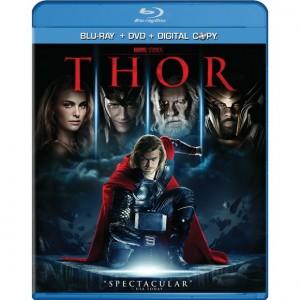 The movie is a bit of a mess, the pacing is way off and they recycle the same gag, every three minutes. I could never escape the feeling that there were a few scenes missing.

The humans believe Thor’s story all too quickly and I would have liked to see more of Chris Hemsworth and Natalie Portman talking about Life, the universe and everything. Or at the very least convince me that there was something going on between them. I just didn’t believe in their romantic relationship. I believed they were friends, but nothing more. Some great characters were criminally underused, as a Marvel geek I was excited to see them in the movie, but I just got the feeling they were there for merchandising. It could be that their backstory was included in the missing scenes I spoke of earlier.

The cast is great, Anthony Hopkins as Odin, Idris Elba as Heimdall and Clark Gregg as Agent Coulson, all put it great performances. But a special mention must go to Tom Hiddleston, he plays Loki brilliantly. With villains, there is always a danger of over, or underacting. He turns in a great, believable performance.  Now whilst I have issues with the way certain characters are used, that doesn’t mean I thought they were miscast.

There are slight nods and references to other characters in the Marvel universe when Loki’s robot turns up on Earth the S.H.I.E.L.D agents ask “One of Stark’s?”.  This movie handles the future setups better Iron Man 2 did, the references don’t just feel like a checklist to pave the way for future Marvel films.

I’m hoping that Thor will work better as part of an ensemble team, in The Avengers. But, he has yet to win me over. It’s really a telling sign, when the 1:45 minute, the post-credit sequence made me more excited than the whole movie.

Thor is out now on DVD, Triple Play and Blu Ray