Here is the first clip from the upcoming, San Andreas. 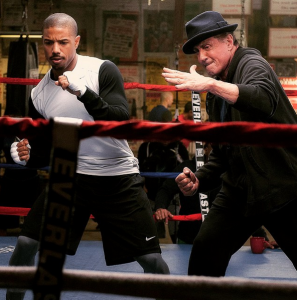 “Adonis Johnson (Jordan) never knew his famous father, world heavyweight champion Apollo Creed, who died before he was born. Still, there’s no denying that boxing is in his blood, so Adonis heads to Philadelphia, the site of Apollo Creed’s legendary match with a tough upstart named Rocky Balboa.
Once in the City of Brotherly Love, Adonis tracks Rocky (Stallone) down and asks him to be his trainer. Despite his insistence that he is out of the fight game for good, Rocky sees in Adonis the strength and determination he had known in Apollo—the fierce rival who became his closest friend. Agreeing to take him on, Rocky trains the young fighter, even as the former champ is battling an opponent more deadly than any he faced in the ring.
With Rocky in his corner, it isn’t long before Adonis gets his own shot at the title…but can he develop not only the drive but also the heart of a true fighter, in time to get into the ring?”
I’m a child of the 80’s, so I grew up watching the Rocky films, I even like the one where he gets a robot butler.

The film is due for release in November.

If you’re a film lover and can spare 20 minutes to watch a YouTube video, then here is a very interesting take on the PG-13 (12A) rating system.
It’s well worth a look and they raise some very interesting points.

Now he’s done battling Cybermen Matt Smith will turn his attention to cyberdyne.
The former Doctor Who star has been cast in the upcoming Terminator trilogy.
His character will play a small role in the first movie, but his involvement will expand in the sequels. Smith will play someone who has strong connections to John Connor.
Shooting has already started and the cast includes Emilia Clarke, Jason Clarke, Jai Courtney, Arron Williamson and Arnold Schwarzenegger.

Skydance tweeted “We don’t have a TARDIS, but we do have a Time Lord: we’re pleased to welcome Matt Smith to the cast of #Terminator”

Terminator: Genesis is set for release in July 2015 and is directed by Alan Taylor.

Below is the first official promo picture from the upcoming new series of Sherlock.
The airdate of highly anticipated series is still to be announced, but speculation suggests that it will air in Janurary. 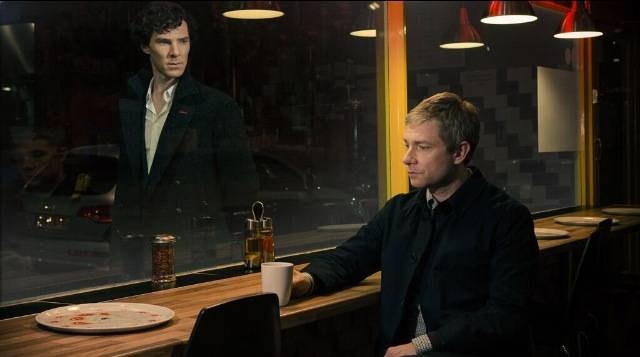 Here is the first look at an upcoming sci-fi film staring Scarlett Johansson.

Below are trailers for some upcoming movies.

We steal secrets:The story of wikileaks

Here is a clip from behind the scenes on the upcoming Lone Ranger, starring Johnny Depp.

You can view the trailer here

Keeping in line with Brand’s comedic style, the tour, officially named “Messiah Complex,” will be a dissection of various social and religious figures and the reality of their lives through comparisons of each other. Messiah Complex is a mental disorder where you think you might be the messiah. Did Jesus have it? What about Che Guevara, Gandhi, Malcolm X and Hitler? All these men have shaped our lives and influenced the way we think. Their images are used to represent ideas that often do not relate to them at all. Would Gandhi be into apple? Would Che Guevara endorse Madonna? Would Jesus be into Christianity? All great people are flawed, all of us, flawed people are capable of greatness and for every identifiable icon there is an anonymous mob of unrecognized bods doing all the admin and heavy lifting. This show looks at the importance of heroes in this age of atheistic disposability. Plus there’s sex. Obviously.

Brand states, “I am going to tour The World (our one, Earth) with Messiah Complex, causing bother and excitement and offering opinions that have not been either solicited or thought through.

Of course I’ll be in English speaking countries (UK, Ireland, US, Canada) but also Scandinavia, Russia, Israel, Lebanon,Palestine; anywhere that will have me to be honest and that are relaxed about free speech. As well as theaters I will be appearing in prisons, drug rehabs, social network HQs, universities, nationalist organisations, Mosques, foreclosed houses, protest sites, Synagogues and in people’s private homes. I dedicate this Messiah Complex tour to the four men that are it’s subject, Che Guevara, Gandhi, Malcolm X and Jesus- I know this is what they would have wanted. If this is the end of the world I’m going to go out laughing with an erection.”
A full list of tour dates is below.

NOVEMBER, 2013
1 Nottingham, UK Nottingham Royal Concert Hall
Tickets for The Brighton Centre performance are on sale now and are available from www.brightoncentre.co.uk or by calling the box office on 0844 8471515

Fans should visit www.russellbrand.tv for all tour and ticketing information.

Below is a video of a Live performance of ‘Isolated Systems’, by Muse, which took place at Horse guards Parade after the world premiere of World War Z.

World War Z is released in the UK on June 21st.