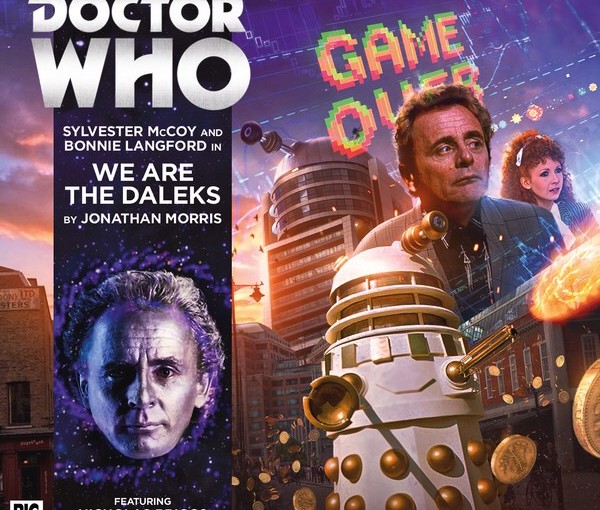 We are the Daleks kicks off a band new era for Big Finish, after 200 releases they’ve decided to draw a line in the sand and provide a fresh jumping on point for new listeners.

Each Doctor will be heading up a new trilogy of stories, first up is the Seventh Doctor and Mel.

The year is 1987, and Britain is divided. In Bradford, strikers are picketing and clashing with the police. In the City of London, stockbrokers are drinking champagne and politicians are courting the super-rich. The mysterious media mogul Alek Zenos, head of the Zenos Corporation, is offering Britain an economic miracle. His partners wish to invest – and their terms are too good to refuse.

While the Doctor investigates Warfleet, a new computer game craze that is sweeping the nation, Mel goes undercover to find out the truth about Zenos’s partners.

The Daleks have a new paradigm. They intend to conquer the universe using economic power. The power of the free market!

This is a great place to jump on. It’s an old school Dalek story that works on multiple levels – it feels familiar, yet new. It pays homage to previous Dalek stories of that era. It also takes a satirical look at Thatcherism and the “greed is good” campaign.

McCoy shines in this, he’s my favourite classic era Doctor-he’s my Doctor. His final speech to the Daleks is chilling, it’s is up there with Matt Smith’s speech in the Pandorica Opens/Big Bang.

What’s also great about Big Finish is that they’ve managed to give characters a second chance. Bonnie Langford was extremely underserved on the TV series. Producer JNT wanted her to play Mel as Violet Elizabeth Bot. Big Finish have unlocked the potential of Mel Bush, they’ve turned her into the companion she should have been on TV.

This is a multi-layered story about ambition, greed and the exclusion of all that’s decent. There’s also a dig at Michael Fish. This is a great start to the new era of Big Finish.