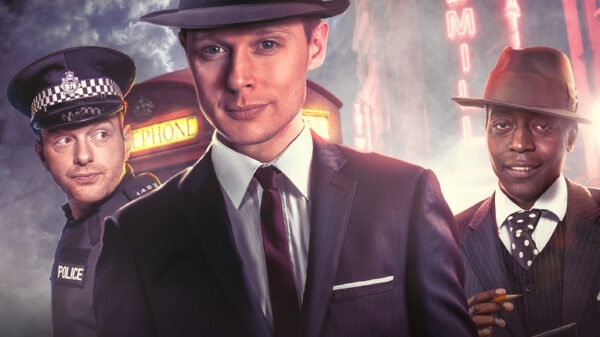 Since he was first introduced in 2016’s Ghost Mission, Norton Folgate (Samuel Barnett) has popped up in several Torchwood audios. His self-serving ways fast cemented him as a fan-favourite. So much so, it’s difficult to imagine the Torchwood cast without him.

In Torchwood Soho: Parasite, we catch up with Norton, as he investigates strange happenings in post-war London. There’re Nazi packages, a man who should be dead, a time-traveling pub and, Torchwood fan-favourite Sergeant Andy Davidson (Tom Price).

Writer James Goss blows me away, with each release. This is no exception. What’s interesting about this box set, is it’s comprised of six half-hour episodes. I loved this format and I hope it stays. It enables the story to be lean and flow at an incredible pace, there’s no filler here.

The story has a non-linear format, but thanks to Scott Handock’s smooth direction, you’re never lost. You know exactly where every character is and their motivations are always clear.

What can be said about Samuel Barnett and Tom Price at this point? They have such great natural chemistry, Norton and Andy are the perfect Big Finish odd-couple. It’s always a joy to hear them interact.

Rounding off the team are Torchwood new-comers, Dervla Kirwan and Joe Shire. Kirwan instantly shines as Lizabeth Hayhoe, she makes the role her own and establishes the character as a force to be reckoned with. Shire is equally charming as Gideon Lyme, a journalist, and love-interest of Norton. There’s also Belle Epoque (Franchi Webb), the immortal landlady of ‘The Stagnant Pond’ pub. All three characters are brilliant for Torchwood, I hope we see them again.

Torchwood-Soho: Parasite is available to purchase directly from Big Finish.