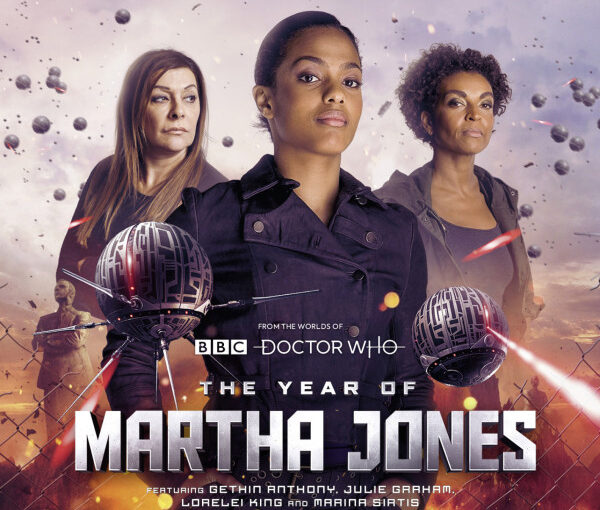 The Master has won. He has stolen humanity’s future and imprisoned his nemesis, ruling the Earth with an army of deadly Toclafane.
But Martha Jones escaped, and now walks the Earth, telling stories of the Doctor. Above all else, humanity needs hope. And Martha will carry that hope across the world.

Something we never saw on Doctor Who is a big component of Martha Jones’ companion narrative.
During a time of death, destruction, and turmoil, she spent a full year on her own.
In the shows third series (Nu-Who), the Master and his army of Toclafane took over Earth and rendered our favourite Gallifreyan hero unconscious and looking like a cross between Yoda and Dobby.

Martha was entrusted with a monumental responsibility by the Doctor.
We know she succeeded because she is the best companion the modern series has had, but we didn’t see how she did it.

The Year of Martha Jones is a unique blend of great storytelling, humour and action. Much like The Doctor, Martha has become a mythological and contentious figure. People across the world murmur her name.
Some see her as a ray of hope. Others think she’s overrated, and her stories are nothing more than fairytales in the middle of constant conflict. They are perplexed by Martha’s genuine objectives and wonder if she has a plan to assassinate the Master.

At her core, Martha is just a human being trying her best to maintain emotional and mental stability in the face of an overwhelming challenge. She’s witnessed horrific tragedies and struggles with loneliness and paranoia all the time, unsure of whom she can trust in the world.

Her hope is still in the Doctor, and she always emphasises his great characteristics in her stories, but reality weighs heavily on her heart.
She is the only one in this unexpected and tough scenario.

The audio quickly finds its footing, thanks to a combination of great writing and performances from all involved.
Freema Agyeman and Adjoa Andoh, who plays Francine Jones, have great and natural chemistry together, it’s revealed in the extras that even Freema’s real-life mum, thinks of Adjoa as her second-mother. Freema calls her “Mamma Adj”.

We also meet a number of new interesting characters, such as Ewart James Walters as Tucker and Serin Ibrahim as Holly, an old college friend, who has a shaky relationship with Martha.

The Year of Martha Jones is a fascinating insight into human resilience, there are no bombastic over the top moments like you’d expect from the David Tennant era. Instead, this is a quiet and reflective story, that focuses on the little victories Martha is able to win on her journey. Scott Handcock’s direction is flawless and is beautifully accompanied by Howard Carter’s music and sound design.

It’s also easily Freema Ageyman’s best performance as the character. Over the years she has grown and evolved as an actress. I really hope this isn’t the last we’ve heard from Miss Jones.

The Year of Martha Jones is available to buy from Big finish.