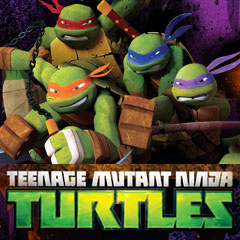 The self-published, 1984 Teenage Mutant Ninja Turtles comic book brought artists Kevin Eastman and Peter Laird intense interest from media, movie studios, television and toymakers. Since then, the comic has continued with no end in sight and new rightsholder Nickelodeon intends the slew of animated series, toys and films to continue in force.

Eastman and a sneak preview of the latest CGI-animated series (illustrated at right) came to Britain’s largest genre event, the MCM London Expo this weekend. Also present was Rich Magallanes, a senior VP at Nick focussed on the series’ writing.

‘It comes from a sincere place’ was a phrase used more than once by Eastman. As an artist, he was also struck by the series’ extension of his classic New York skylines into ‘twenty city blocks’ and the re-introduction of the logo design he did back in the ’80s.

Another throwback to the original Turtles is their best human pal, April O’Neil.  Once more it’s she who names the turtles and she’s back in a laboratory instead of being reimagined as yet another plucky girl reporter.

Always controversial has been the direction of the original, violent parody toward a younger audience. ‘We’re trying to touch the whole family,’ says Magallanes, who notes that although ‘they’re not busting heads’ the turtles are still ‘world defenders,’ laying the smackdown upon a variety of inhuman baddies. Nevertheless, ‘they want to be teenagers first, playing around with each other and having fun.’

Magallanes considers the comic and films ‘extensions of the core series’ but both men are keen to allow the comics to remain true to their origins. Peter Laird is taking a much-needed break from the franchise but Eastman is working with IDW on issues of new and reprinted stories. Meanwhile, a fifth Turtles film is currently in production, by Transformers director Michael Bay.

When Bay described the turtles as ‘aliens’ recently instead of mutated Earth turtles, many fans went ballistic. As the movie is in a much earlier stage than the TV series the outcome of this controversy is unclear, although Eastman appreciates the fact that the famous ‘ooze’ that mutated the turtles in the first place can be considered alien in origin. Eastman: ‘Michael Bay’s heart is in exactly the right place.’

Like the film, the TV series will begin its story afresh. ‘We want to reset it and grow it even bigger,’ says Magallanes. He feels the story of the Teenage Mutant Ninja Turtles lends itself to extended storytelling. ‘We get to live with it.’