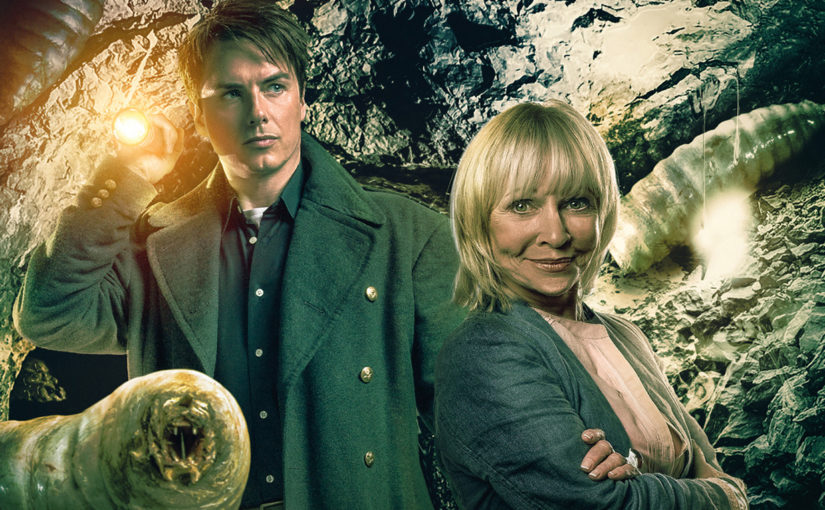 At first it seems like Captain Jack Harkness, leader of the ‘beyond the police’ Torchwood organisation and time-travelling Doctor Who companion turned eco-warrior Jo Jones (née Grant) would be quite a contrast when paired. But in ‘Torchwood: The Green Life’ the two are bound as much by what they share as what divides them.

Jo, in this story, is decades older than the girl who once travelled with The Doctor. Everything she learned from her time with UNIT is sewn into this Jo of today and much more besides. This woman is a good match for the immortal Jack, whose dashing young appearance only partially conceals how much of his strength is devoted to enduring a string of painful deaths and centuries. Big Finish audio dramas never shy from the role appearances play in stories when it’s relevant: here we have a pair of lovely fan favourites set amid some gruesome situations.

We’re back in Llanfairfach, the Welsh locale of the 1970s Doctor Who serial, The Green Death. The story then – of pollution-bred giant maggots and a technically-adept evil corporation – continues here. As Jack and Jo clamber over old territory we learn new things about them both.

Katy Manning has kindly returned to play Jo now and again in the past couple of decades – in television and in audio – and each time we get a hint or two about the character’s life since the 1970s. Here there’s quite a bit of her back story, particularly with regards to Llanfairfach. It’s a treat to hear the world of Jo Jones expanding into a mini-franchise of its own.

John Barrowman has been equally generous in his support, for the Torchwood franchise and for the ‘Whoniverse’ in general. He continues his regular contributions to Torchwood on audio here, with a bit of a new challenge: the gentlest members of Jack’s team were never as ‘right on’ as lovely Ms Jones. In Jack’s world, he and his go to some rather harsh extremes, they take their lumps and then find some way to make peace with themselves afterwards. Jo presents him with a world where there are certain lines that are simply not crossed. Where right and wrong don’t often intermingle. Where loyalty is everything.

The legacy elements of this story are taken in genuinely new directions. We get some detail about how the scientific advances of the 70’s Wholeweal community have developed in the years since. We learn a bit more about Llanfairfach as a population centre and its lifestyle in 2019. And we’re presented with something new that has gone very, very wrong. It’ll certainly inform a listener’s first real-world glimpse of a self-driving lorry.