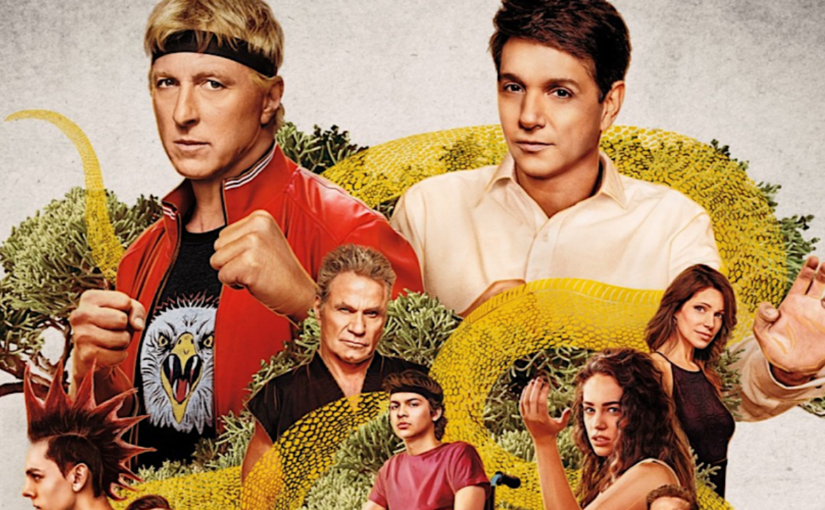 This weekend, fan-favourite Cobra Kai returns to Netflix for its fourth series.

In this series, we see Johnny Lawrence (William Zabka) pair up with his long-term enemy, Daniel LaRusso (Ralph Macchio). The duo has put aside their differences and merged their classes, in order of giving their students a chance at winning the tournament against the Cobra Kai dojo, now managed by John Kreese (Martin Kove).
This was never going to be an easy match, especially now that Kreese’s old war buddy, Terry Silver (Thomas Ian Griffith) has returned. Everyone is on the edge and unsure of what to expect.

This series returns to a more character-driven narrative, that some fans may have felt was missing from series 3. Thomas Ian Griffith is clearly having the time of his life, playing a complete psychopath and he’s exactly what the show needed. Johnny’s estranged son, Robbie (Tanner Buchanan) has joined Cobra Kai and is teaching them everything he learned from Daniel and Miyagi-Do. Samatha (Mary Mouser) has fully embraced Johnny’s “strike-first” attitude.

There are some twists and turns that I won’t spoil here. We also get to see a lot more of Daniel’s son, Anthony LaRusso (Griffin Santopietro). This is nice, as he’s mostly just been in the background for a lot of the show. We’re also introduced to a new character, Kenny (Dallas Dupree Young).

It’s a fantastic set of episodes that move the story forward and set up the future of the franchise. I came away from this extremely excited for series 5. However, the first eight episodes do sometimes feel like they’re just treading water until the tournament in the last two.

Series 5 has already been greenlit, so I can’t wait to see where they take this franchise next.