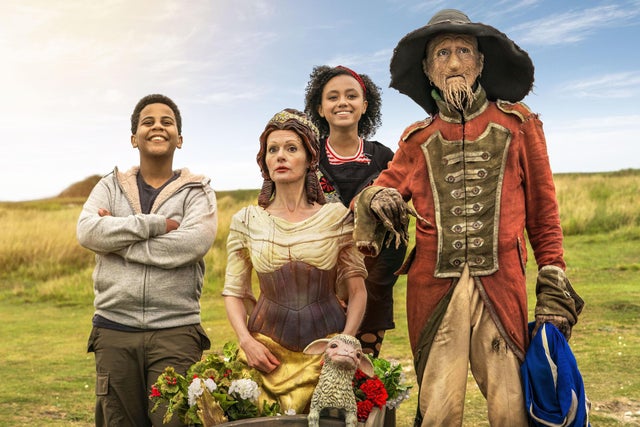 Following last year’s festive specials, we’re back in Scatterbrook accompanying Worzel Gummidge on another madcap adventure. As with the last two, ‘Saucy Nancy’ is written and directed by Executive Producer Mackenzie Crook.

Worzel is rich, for a scarecrow. He’s found £20 and the money is burning a hole in his pocket, he wants to buy a door. So he enlists ‘the chillun’ Susan (India Brown) and John (Thierry Wickens) to help him find one. Whilst at a salvage yard, he stumbles across his old foul-mouthed friend, Saucy Nancy (Shirley Henderson). The sea is calling Nancy and she wants to get back to it, our trio of heroes vow to help her.

The two specials last year were undoubtedly the highlight of the festive period. This year is no different. This is a well-written and well-directed family adventure, bursting with heart and humour. Once again, Brown and Wickens feel like brother and sister and the entire cast have such natural chemistry, that a walking talking scarecrow seems like the most normal thing in the world. Shirley Henderson is an absolutely wonderful addition, in all her (scarecrow) sweary ways. There’s also a great turn from Venessa Redgrave as “Peg”.

Steve Pemberton and Rosie Cavaliero take more of a back seat in this, as Mr and Mrs Braithwaite, but they’re both still excellent in their respective roles. Mr Braithwaite has even softened to the kids “these two are different, they’re keepers” he tells his wife.

After the year we’ve had, it was extremely comforting slipping back into the innocent world of Worzel Gummidge. This show is about love, hope and trust, which is what we could all do with right now.

Mackenzie Crook has once again proved, that he is more than a worthy successor to Jon Pertwee. Ten Acre Field is in very safe hands.