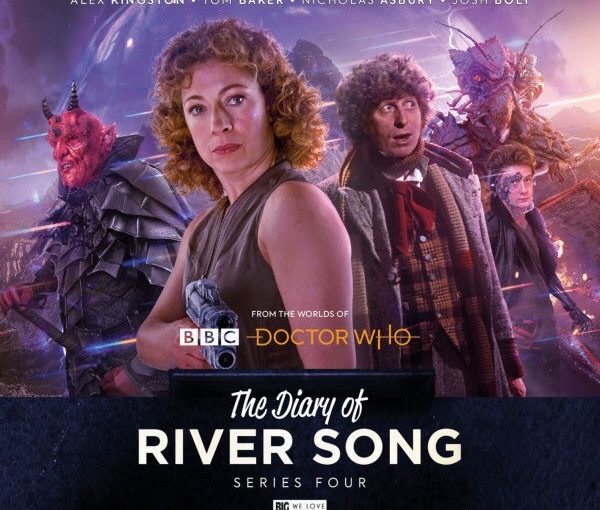 After adventures with the eighth, seventh and sixth Doctors. River Song finally meets with the legendary Fourth Doctor, in The Diary of River Song Series 4.

When River Song visits a place where time has vanished, a genie escapes its bottle… the Discordia are freed – nihilistic time pirates, in devilish form, altering the past to make sure they never lose.

Emma Reeves and Matt Fitton’s Time in a bottle, has a fascinating story idea. There’s a place in space with no time. That’s such an interesting concept for a story. However, I can’t help but feel this story is wasted in a box set format. There’s nothing wrong with it, it’s a strong concept, with great writing and a superb cast, with writers at the very top of their game. I just feel the time constraints of a boxset limit the stories true potential.

This would’ve made a very interesting four-part story in its own right.

Regardless, it’s a solid introductory adventure that sets up the premise and introduces the main villain. It also takes the interesting angle. It feels like a good old fashioned pulp adventure. James Bond-esque in places. It pits River against her intellectual rival and shows her at her most Doctor-like state.

‘Kings of Infinite Space’ may not have the most original plot, but it is very entertaining and rewards repeat listening. It’s easily the strongest of the set. It’s well paced, paradoxical and fun. Alex Kingston and the rest of the cast are on top form. It feels like a Moffat era Doctor Who story. There’s action, humour, with a great use of the vortex manipulator and the locations that time travel opens up. It’s everything you could want from a River Song audio.

‘Whodunnit’ is an oddity in this boxset. Now, that isn’t me saying it’s bad. Far from it. The concept is interesting, with some thought-provoking philosophical discussions, the characters are three-dimensional and it’s well paced. However, it just doesn’t fit this box set. Like time in a bottle, this would’ve made a great main range story. Given more time to fully explore the premise, this could’ve been great. But I felt it interrupted the flow of the story ark.

That said, it’s an interesting listen with a fun take on the cliches of murder mysteries.

Someone I once knew, is the big one. The season finale, the one fans are excited for and it delivers. John Dorney brilliantly subverts expectation and puts an interesting spin on the River/Doctor dynamic.

Tom Baker and Alex Kingston have an instant rapport and a naturally brilliant chemistry. I would welcome future stories with this duo. Their chemistry is so natural, it’s difficult to believe they only met on the day of recording.

Series four of ‘The Diary of River Song’ perfectly meshes the unique styles of the Steven Moffat era and Big Finish originality.

Not every story works completely and suffers from what most prequels do. Giving River companions is always going to be tricky, as we’ve never encountered or heard mention of them in the main show, you know they’re a goner the second they’re introduced.

At times the fourth Doctor feels more like a plot device, than an active companion. But this set is an absolute joy to listen to and has left me excited for series 5.