This was my favourite of the series yet. This episode is so crammed with little gems that it’s difficult to know where to begin.
Nelson is involved in a protest against the build, of a new supermarket. He foolishly leads his fellow protestors to their deaths, but in the process, he meets an older Vixen called Eileen.

Nelson and Eileen soon fall in love, but unknown to Nelson, Eileen is Vince’s mum. Nelson seeks Vince’s blessing and asks Eileen to marry him, but the surprise proposal causes her to have a fatal heart attack. Not wanting Vince to find out that, that’s how his mother died, Nelson asks Tim to take the body back to the nursing home. Along the way, Tim loses Eileen and she is sold to Zoe Ball, as a scarf. 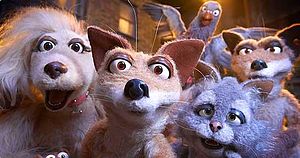 Like last week, it was great to see a softer side to Vince. It’s a shame Eileen wasn’t kept around for a few more episodes. The father/son dynamic between Nelson and Vince would have been interesting to explore, but I’m starting to see that nothing lasts forever in the Mongrels universe.

Elsewhere, Kali has lost her spot on the fence to an African pigeon. Which leads to this week’s musical number, Immigration Nation. Which fitted the episode well. Kali tries all kinds of tactics to get rid of him and then joins a flock. Which after seeing human street-gangs, she believes will help her out. When this doesn’t work out, she tricks the immigrant pigeon into calling Eileen a slag, which prompts Vince to kill him, thus solving her problem. This was a funny subplot, which showed just how manipulative Kali could be when she isn’t getting her own way.

The other sub-plot involves Destiny and Marion, Destiny is angry with Gary after he takes her to the vets, so she pretends to run away, Gary finds him and takes him in. Which leads to bitter sibling rivalry between Destiny and Marion. It was great to see Destiny and Marion fight it out, like well, cat and dog.

Mongrels has hit the ground running this year, a third series is surely a must. This is fast becoming the television highlight of my week, its the only instance I’ve ever wished a British series was 22 episodes.
It won’t be long before we hear the word “American” quickly followed by the word “Remake”.