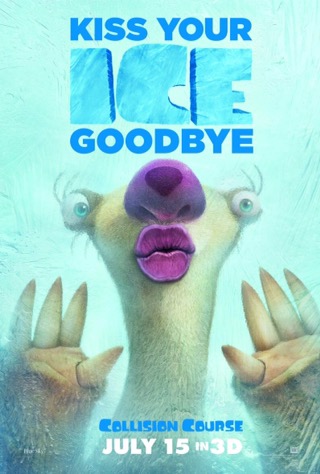 Although the Ice Age films have never quite reached the same level as Pixar, they’ve consistently given us lovable characters and fun filled-family friendly adventures. For 14 years Scrat, Manny and the gang, have kept us coming back for more.

But, with Ice Age: collision course it feels that the Blue Sky franchise, has lasted longer than the actual Ice Age.

Whilst chasing his elusive acorn, Scrat is accidentally hurled into space. In orbit, he causes a meteor to head towards Earth.

Back on the ground, our 12 main characters attempt to stop the collision.

All our old favourites are back-Manny, Sid, Diego and the rest of the herd, along with Simon Pegg’s Buck the weasel (last seen in Ice Age: Dawn of the Dinosaurs) and let’s just thank our lucky stars that he is. His re-introduction to the group, along with Pegg’s charismatic voice, adds life to an otherwise completely dull film.

The rest of the herd exist purely to regurgitate bad subplots, from 80’s sitcoms. Manny is an overprotective father. Crash and Eddie are there to annoy. Sid is there to be pathetic. Diego is there to be sarcastic, the women exist to be the women and, so on.

The film isn’t awful, it’s just weak and doesn’t live up to its predecessors. There’s enough bright colours and fart-jokes to make Collision Course a hit with young kids, but there really isn’t enough to keep adults interested.

When Dreamworks realised Shrek’s popularity was waning, they did the smart thing, pulled the plug and gave Puss in boots a spin-off. Blue Sky need to follow suit and let Scrat and Buck have an adventure.