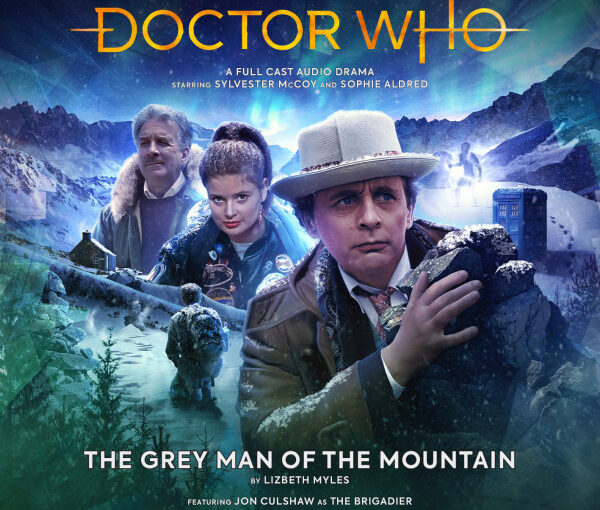 Something haunts the peak of Ben MacDui.
Something with heavy footsteps, striking terror in the hearts of those who sense it. With climbers going missing, retired Brigadier Lethbridge-Stewart visits Scotland to investigate.
But when some old friends join his ascent, he worries that they will make things even more dangerous. As the snows blow in, and mists surround them, the Doctor, Ace and the Brigadier will face the Grey Man of the Mountain…

This year’s Christmas offer from Big Finish is a pretty strong release, it’s more subtle than last year’s ‘Blood on Santa’s Claw and Other Stories’. Written by Verity’s Lizabeth Myles, it teams The Brigadier up with The Seventh Doctor and Ace. Jon Culshaw plays the role exceptionally well. He’s so pitch-perfect that, if you didn’t know this wasn’t Nicholas Courtney, you wouldn’t know this wasn’t Nicholas Courtney.

McCoy and Aldred are on top form as always. The setting and environment make for a tense and unnerving experience. The audio is so vivid, I could see the action playing out in my mind’s eye. This felt like a Seventh Doctor/Ace era storyline. The audio even plays around with Ace’s sexuality, by maybe possibly giving her a love interest with Lucy Goldie’s vlogger character. The pair of have such natural chemistry.
There are a few niggles though. Vivien Read slightly overplays the landlady. It’s like she’s in completely different story-at times she reminded me of David Walliams’ Scottish riddler from Little Britain.
The audio also overruns by about 30 minutes. This, plus a sizeable guest cast makes material thin on the ground, I found myself starting to drift a bit towards the end.

Those nitpick’s aside, Grey man of the mountain is an immersive, atmospheric and underplayed Christmas special. Which takes full advantage of its setting, cast and the medium of telling a story for audio.

Doctor Who: Grey man of the mountain is available to purchase directly from Big Finish.