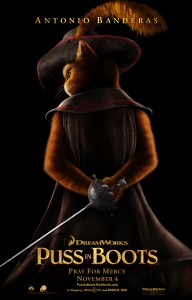 in Shrek 2 way back in 2004. Now that DreamWorks have milked the Shrek franchise for all its worth, it is finally time for the cat to have his day.

This is essentially an origin story. It’s set way before Puss met Shrek, Fiona and Donkey. Since Puss is the main character, he needs wacky, funny characters around him. The love interest is a feline named Kitty Softpaws (Salma Hayek) and Humpty Dumpty (Zach Galifianakis) is Puss’ best friend from childhood. Puss and Humpty Dumpty were once as close as brothers until Puss became famous. Humpty soon became jealous of Puss and betrayed him by tricking him into a bank robbery. Years later, Humpty tracks him down seeking forgiveness, as well as help with a new scheme. The scheme involves stealing some magic beans from an out-law couple, Jack and Jill. The magic beans will send them up the famous beanstalk to the golden-egg laying goose.

The first half of the movie is better than the second half. I think this is due to it being such a busy story, the ending is little anti-climatic, but strangely unlike most children’s CGI movies, it isn’t bogged down by the over-preachy moral of the tale. The performances are all solid, but special mention must go to Antonio Banderas, he manages a performance that is consistently amusing as well as moving. The moment he sees his heartbroken mother staring at him is gut-wrenching. Visually the film is a treat. The 3D works well but adds little to the overall experience. The film would still be funny, enjoyable and moving in 2D. Puss in Boots is not a great film, but it is an extremely good film.