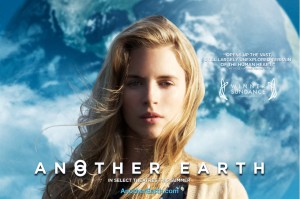 Another Earth is a great little gem of a movie, written by Mark Cahill and Brit Marling. Marling also stars as the main character of the film, Rhoda Williams.
Rhoda has recently been accepted to MIT and she goes out to celebrate with friends and drives home drunk. On the drive home she listens to a news broadcast on the radio about an approaching planet that looks just like Earth, she looks out her car window and crashes into another car, putting John Burroughs (William Mapother) in a coma and killing his wife and son.

Rhoda is sent to prison and after serving her sentence she tracks John down and decides to take care of him. Rhoda learns that there is a lottery to win a trip to the mirror Earth. She hopes that her other self didn’t make the same mistake and applies for a place.

Although the title and premise make this sound like a sci-fi movie, it is far from it. Another Earth is clearly a metaphor for a second chance, something we all desire. The only misstep this movie took, was having Rhoda and John become romantically involved. The relationship could have been a lot more touching if it hadn’t been romantic.

This is easily the best movie I have seen this year and shows indie cinema at its best. Had this been a blockbuster the mirror Earth inhabitants would have been evil versions, with goatee beards and WMD’s. I can’t recommend this film enough, this deserves a lot of praise. I would love a mini-series follow up exploring the consequences of another Earth being so close to ours and also to see what was happening to the inhabitants on mirror Earth.

Another Earth is in cinemas, nationwide.