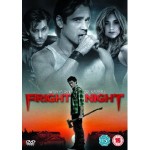 Charley Brewster (Anton Yelchin) and his mum (Toni Collete) have got a new neighbour called Jerry (Colin Farrell). Ever since Jerry moved in, local residents have gone missing. It’s also been about a year since Charley last spoke to his geeky best friend, Ed (Christopher Mintz-Plasse).

You see, Charley is desperate to outgrow his nerdy roots. He got himself a girlfriend (Imogen Poots) and spends his days trying to befriend/impress the school’s dumb jocks. So when Ed starts making outlandish claims that Jerry is a vampire, Charley tries to distance himself even further. Ed then goes missing, causing Charley to believe Ed’s theory. The thing is, now nobody believes Charley.

I’m a fan of the original so I approached this remake with a lot of trepidation. Unlike most remakes, this is entirely enjoyable. It’s faithful enough to the fun of the original whilst ramping up the tension and applying a modern spin. It’s got a good, strong cast, especially Farrel, who’s really intimidating as Jerry: he owns every scene he is in. The dialogue is sharp and witty and the movie is well-paced. Dare I say it – the acting is so much better in this than the original.