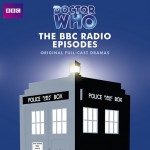 Here’s a beautiful box-set of BBC radio plays. So beautiful in fact, I almost didn’t open it.

It’s a collection of radio adventures; there are three different Doctors, the 3rd, 4th and 6th.

The Paradise of Death and The Ghosts of N-Space

Neither story really works that well and they introduce an extremely annoying, new companion.

In N-Space we meet the Brigadier’s uncle, in an awful ghost tale.
The performances are strong, but the scripts aren’t that great. You can make bad audio out of a good script, but you can’t make good audio out of a bad script. It does, however, try to capture that era of Doctor Who, which even though it failed, was an interesting experiment and given the recent passing of Nicholas Courtney, it was great to hear him again

Doctor Who and the Pescatons

This is a fun little tale, which features the 4th Doctor and Sarah Jane. The Doctor and Sarah are battling monsters, that are bringing panic, to the streets of London. This is less than an audio play and more of an audiobook, with Tom Baker narrating and Liz Sladen throwing in the odd comment. It’s a fun story, but I couldn’t help but feel that it would have suited Patrick Troughton’s 2nd Doctor better.

This is the real clunker in this box set. It features the 4th Doctor and Sarah Jane investigating the start, of life on Earth, only to run into the Megaron Lord of Chaos. The performances feel a little “phoned in”.

Whatever Happened To… Susan?

This is a tongue-in-cheek tale of what Susan did after she left the TARDIS. Jane Asher takes over from Carol Anne Ford, as Susan and is talking to a documentary crew, about her life after leaving the TARDIS.

There is some laugh out loud moments here, including her tale about how The Doctor gets younger and younger with each regeneration and how companions fell in love with him.

It’s an amusing story that runs at about 30 minutes, but it completely contradicts continuity. If you’re willing to switch your brain off and just listen, then you’ll have an amazing time, if you get bogged down with continuity, you won’t enjoy it.
I couldn’t help but wish that it was a proper, serious audio drama, with Carol Anne Ford reprising the role of Susan and telling the tale. Done seriously, this could have been a brilliant audio drama

Now, this was the first Doctor Who story made for radio and was broadcast during the show’s enforced hiatus, in 1985.
This was a very Douglas Adams story – I could imagine Arthur Dent and Ford Prefect in this. This isn’t a great story; the computer is annoying but likeable. The performances of Colin Baker and Nicola Bryant are quite good and you get a foreshadow of the chemistry that would later work so well on Big Finish.

It’s a good enough box set with a few decent tales, but also with a few poor episodes. I’d say this is one for true, die-hard Doctor Who fans. Viewers of the new series will get very little for money.