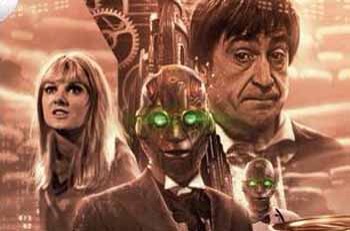 The Yes Men is the first in a new four part series of full cast audio stories called ‘Early Adventures’. These adventures are focusing on the second Doctor and his various different companions.

Fan favourite Frazer Hines reprises his role as Jamie and also plays The Second Doctor. Anneke Wills acts as narrator as well as reprises her role as Polly.
As Michael Craze sadly passed away in the late nineties, the role of Ben Jackson has been recast with Elliot Chapman.

The story starts with the Doctor wanting to visit his old friend Meg Carvossa, on the Earth colony of New Houston. Shortly after arriving, team TARDIS find that Meg has died in a mysterious way. That’s not the only problem, the helper robots have started acting a bit shifty.

What follows is a suspenseful tale of suspicion and death.

I know a lot of hardcore fans are unhappy with the recasting of pivotal roles, I am not one of them. I want Early era Big Finish stories and this is the only way we’re going to get them.

Elliot Chapman is phenomenal as Ben. It’s as if Michael Craze never left us, Chapman plays the role with the upmost respect for Craze, yet he also manages to make the role his own. The result is mesmerising.
I’m a huge fan of Frazer Hines, so I hate to type this. But, I don’t rate his turn as The Second Doctor. He can do a really decent impression of Patrick Troughton but that doesn’t really work for a 2hr audio play.
Other than that, everything else is up to the high standards we’ve come to expect from Big Finish. The script is solid, the direction is flawless and the music adds to the atmosphere. Stephen Critchlow is excellent as the mono toned Yes Men.

I look forward to hearing what the next set of Early Adventures brings us, but I’m especially intrigued to see what Elliot Chapman does with Ben Jackson.