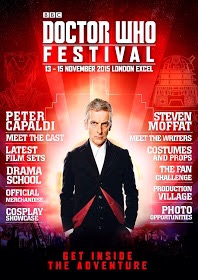 BBC Worldwide have announced some new names for the official Doctor Who Festival, which takes place this November in Excel.
Mark Gatiss (The Unquiet Dead, Night Terrors), Sarah Dollard (Primeval, Doctor Who Series 9, Episode 10), Toby Whithouse (Being Human, Doctor Who-School reunion), Catherine Tregenna (Torchwood, Doctor Who-The Woman Who Lived), Jamie Mathieson (Flatline, Mummy on the Orient Express) and Peter Harness (Kill The Moon, Invasion of the Zygons).
Will join the previously announced Peter Capaldi (The Doctor), Michelle Gomez (Missy), Ingrid Oliver (Osgood) and current showrunner  Steven Moffat. (Still no mention of Jenna Coleman).
BBC Worldwide have come under a lot of fire about the cost of the event, but honestly I think they’re making it worth your money.
Along with the guests and photo opportunities, there will be theatre panels with the show’s stars.
You’ll get to attend panels with all the series 9 writers, plus watch shows by real SFX and Millennium FX, and exclusive looks at three sets from Series 9.
Big Finish will also have a large presence there,  you’ll get the chance to take part in Acting sessions run by Nick Briggs. You’ll also get the chance to see what it’s like to work behind the scenes in production village.
This sounds like it’s shaping up to be a great event for any Doctor Who fan.
For more information click here