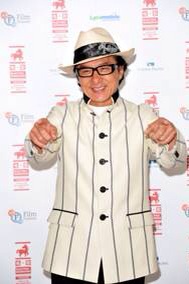 Jackie Chan visited BFI Southbank for a screening of his film Chinese Zodiac and had an exclusive career interview with Jonathan Ross. The event was part of the British Film Institute’s A Century of Chinese Cinema season sponsored by Lycamobile, the largest global provider of low-cost international mobile calls.

The interview is a fantastic insight into the acting legend, and Ross even manages to persuade Chan to sing the song from Little Big Soldier at the end!