It’s difficult to believe that this game is over a decade old. It was m 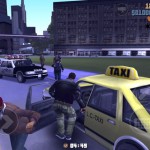 y reason for buying a ps2. This was a massive achievement for Sony and set a high standard for this type of game. It is now out on the iPad and iPhone.

The visuals still stand up and seem to have been slightly improved. The only annoying thing is that being touch screen it is initially difficult to control. Do yourself a favour; tell your partner, your kids and your friends that you’ll be busy for the foreseeable future. The game is beyond addictive.

Grand Theft Auto III is available from the iTunes app store for £2.99