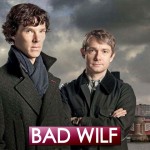 The episode features the Doctor (Matt Smith) stranded on Earth and separated from his companion Amy Pond (Karen Gillan), when an unknown force prevents his time-traveling spaceship, the TARDIS, from landing. To investigate, he moves into the flat of Craig Owens (James Corden) and attempts to fit in with ordinary humans while unknowingly playing matchmaker for Craig and his good friend Sophie (Daisy Haggard).