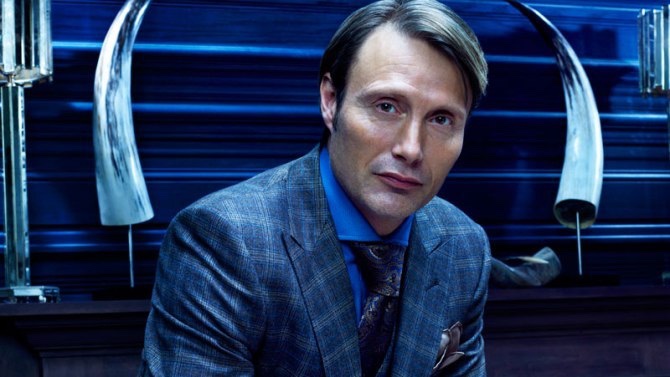 Pop quiz! Whose toes would you prefer to accidentally stepon: the well dressed, mild-mannered gentleman in the 3 piece suit, or the crazy-eyed, unshaven mental patient who is rocking in a corner, mumbling to himself?

Did you pick the mild mannered gentleman? Congratulations! You are now pâté.
That’s right; you’ve just pissed off Dr. Hannibal Lecter, everyone’s favourite rudeness-abhorring, people-eating psychiatrist. In the new series, simply titled “Hannibal”, he comes in the form of a devastatingly elegant Mads Mikkelsen, who appears in every episode dressed to the nines in either exquisitely tailored 3 piece suits or equally exquisitely tailored chef’s whites – although those whites do tend to beliberally splotched in blood and guts of questionable origin.

The series takes place in the years leading up to HannibalLecter’s capture by Will Graham (as detailed in the book and film Red Dragon). The characters meet in a the first episode, where retired FBI profiler Will Graham (Hugh Dancy), is drafted back in to help catch a serial killer by FBI Director Jack Crawford (Laurence Fishburne). Graham’s gift, his “genius”, lies in his ability to inhabit the minds of serial killers. This is illustrated in the show in the most literal fashion – Graham closes his eyes, and with a few soundtrackswooshes, we get to watch him mentally recreating each murder he investigates. His great fear, and the fear of everyone around him, is that he will lose the ability to separate himself from the minds of those killers. Concerned for Graham’s mental health, Crawford has him meet with noted psychiatrist Dr Hannibal Lecter. As Graham continues to work with the FBI on further cases, he becomes a regular patient of Dr Lecter, ostensibly so that Lecter can keep an eye on his mental state, but really so that Lecter can observe Graham’s ongoing breakdown, like a creepy kid with an ant farm.

Where Mikkelsen plays Lecter with a formidable amount of grace, poise and an almost reptilian lack of emotion, Dancy’sWill Graham is a scruffy, rumpled mess who veers from twitchy, manic rambling to near catatonia in the space between ad breaks. You can actually see the emotions writhing across his face as he tries to differentiate between imagination and reality. When not losing his mind chasing murderers, Graham is a soft-spoken, soft hearted kind of guy, who adopts stray dogs off of the street, so you know he’s a goodie. Unfortunately, his talent for seeing himself, in his mind’s eye, committing horrific murders is sending him right off the deep end.
And boy, howdy – are these murders ever horrific. I would not be surprised to learn that the writers have a running bet on who can come up with the most gruesome tableaux. This series gives us such memorable gems as Human AppendageJenga; The Devil’s Cello; Still Life with Regurgitated Ear; and one of my personal favourites, Sweetbabyjesus I Will Never Eat Mushrooms Again.

The show is beautifully framed and shot with composition soartistic some scenes are like watching a painting come to life. This includes not only the stomach-troubling crime scenes, aswe also get to watch as Dr Lecter prepares a series of beautifully presented gourmet meals, comprised mainly of human organs. As a bonus, we also see him feed these lavish meals to his nearest and dearest and completely unsuspecting friends. If you find yourself screaming “Don’t eat that, it’s people!” at the TV, rest assured that you are not alone.
Supporting characters include Caroline Dhavernas as Dr. Alana Bloom, concerned colleague and almost-but-not-quite love interest of Will Graham; Kacey Rohl as Abigail Hobbs, the daughter of a killer who impales women on deer antlers; Lara Jean Chorostecki as Freddie Lounds, a tabloid blogger so greasily hateful you’ll be wanting to introduce her to Francis Dollarhyde personally; and of course Gillian Anderson as BlondeScully. No, sorry. She plays Dr. Lecter’sown shrink with a possibly shady past, Dr. BedeliaDuMaurier.

The series overall is well-written and features excellent performances from the whole cast, and it ends on a cliffhangerthat will have you counting down til next year’s second series. Best of all, if you watch it right before dinnertime,“Hannibal” can also serve as one hell of a diet aid.

Hannibal is released on DVD and Blu ray from September 2nd.