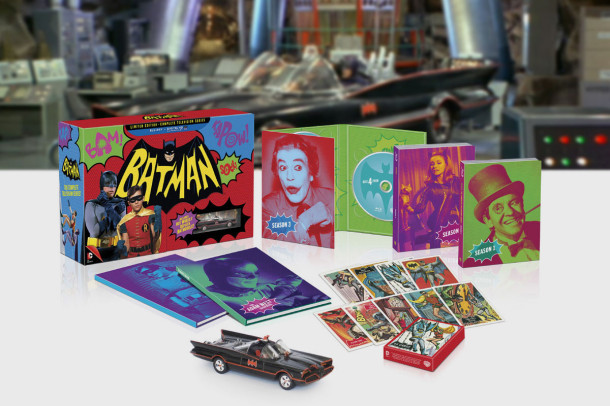 It’s about bat-time but not a moment too soon! I can still remember being delighted and terrified by reruns of the 1966 Batman TV series, from the age of four onwards. From 10th November 2014 it will at last go on sale for Batman’s 75th anniversary, with the original film prints presented in high definition, Blu-Ray™ glory.

At the dawn of colour television, producer William Dozier adapted Bob Kane’s superhero comic in an intentionally vivid manner, from the rainbow colours of costumes, props and lighting to dramatic camera work and the lush physical texture of everything in vision. Batman comics of that era were straightforward adventures but with oodles of absurdity: adapted faithfully into live action they came off extremely camp. Resisting the temptation to cushion the spectacle with a laugh track gave Batman its signature feel.

Because a film studio brought Batman to telly, an army of Hollywood film stars were at hand. Each celebrity ‘did a turn,’ taking the campy spirit of the programme very much to heart. This luxury would also keep the programme off shelves for decades, mired in conflicts with actors’ contracts and studio ownership. Now all differences have been resolved and the wait is over!

In total, there are three hours of enhanced content:

The Blu-Ray™ Limited Edition also contains a host of box set premiums for us Batfans:

I speak with the honesty of the caped crusader when I tell you that my heart is batting quite rapidly just thinking about it all. Year after year, Batman repeats would be snipped more and more as the size of advert breaks continued to rise. Eventually, concluding episodes would reprise clips from scenes that had been cut from the previous show!

Now, Batman ’66 has been restored to a condition better than ever seen before. By itself that would be bat-tastic but the care and creativity put into this set by Warner Bros. Home Entertainment has me dancing the Batusi.