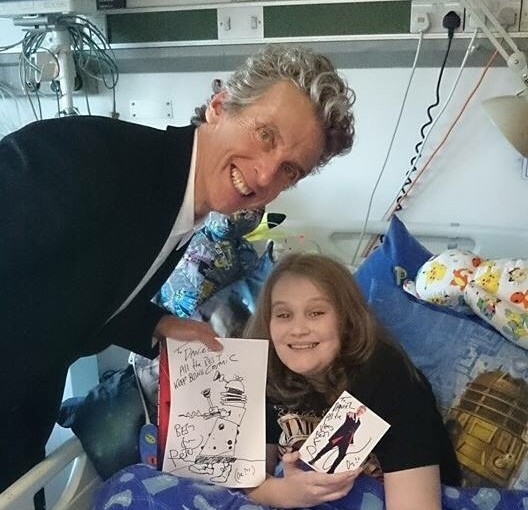 Most of you will be aware that over the Christmas period, we teamed up with our good friends at Geeksynsicate, to help a very ill Doctor Who fan have a truly great Christmas.

For those of you unaware, Daniel is a very ill 14-year old, who also happens to be massive Doctor Who fan. He was originally admitted to a London hospital in November 2015 and is still there, he was recently moved to the intensive care unit.

He suffers from Ehlers-Danlos syndrome (EDS) and Postural tachycardia syndrome (POTS) he is totally bed bound and is fed via IV.

We had a tremendous start to the campaign, but since society’s christmas spirit has become a distant memory, the campaign has mostly come to a grinding hault. We had great success with Sylvester McCoy, Christopher Eccleston and, Peter Capaldi. Boy We’ve hit a total brick wall with contacting any of the other Doctors.

He would also love to meet any actor who has been involved with the show.

More recently, Daniel receieved an autograph from Simon Pegg and, a letter from Katy Manning.

Below are the video messages Daniel has already received.