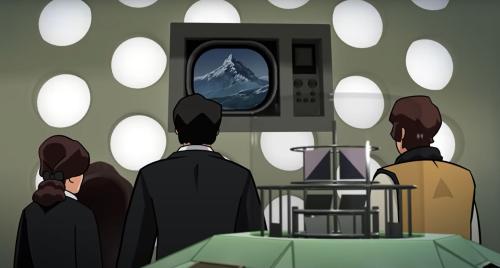 The BBC has announced that an animated version of the 1967 story The Abominable Snowmen will be released next year.

The story stars Patrick Troughton, Frazer Hines, Jack Watling and Deborah Watling. The serial was the second story of Season 5 and features the Doctor’s first encounter with the Great Intelligence. It was originally broadcast between 30th September 1967 – Saturday 4th November 1967.

As videotape was really expensive back in the day, the BBC took to wiping them for re-use. A lot of early performances of The Beatles, episodes of Dad’s Army and, Doctor Who is now missing. Of this six-part story, only episode two still exists.

All six episodes have been animated and will be released, with the existing episode two.

Russell Minton, the Executive Producer of The Abominable Snowmen, said:

“We’re delighted to announce Doctor Who: The Abominable Snowmen, something Doctor Who fans have been waiting patiently for over the years. We’re grateful for the surviving audio-only recordings, which we are very lucky to have, courtesy of several Doctor Who fans, which have allowed us to create another exciting and action-packed chapter in the Doctor’s story.”