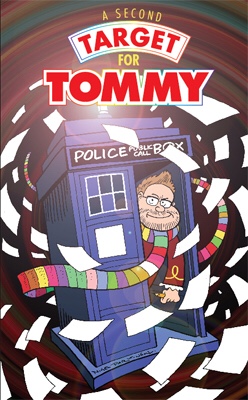 The former Doctor Who showrunner has made the first draft of the day of the Doctor script, available for the charity project A Second Target for Tommy. There are a couple of changes.

“While novelising Day of the Doctor, I went back through all the many drafts of the script, and I found this version of the barn scene.

The Moment is clearly not Rose Tyler in this draft, and the barn itself has a different, erm, origin. If barns can be said to have origins.

But the other big difference is the one that people might get a kick out of. Hope you enjoy, but please do keep in mind this is the roughest of early drafts…”

Don’t sit on that.

He strides over to her, grabs her arm.

Because it’s not a chair, love – it’s the most dangerous weapon in the universe.

Listen. A very bad thing is gonna happen here and I’m not sure how it’s gonna work. But I don’t think you want to be here when it does, okay?

…you’ve got a funny face.

You should see the other fellas.

Thanks, it’s new. Not sure about the ears yet, they just sort of kept going. Now, you need to get away from here. You need to pick a direction and just run –

Not clever enough to figure out how this thing works, so could you give us some hush?