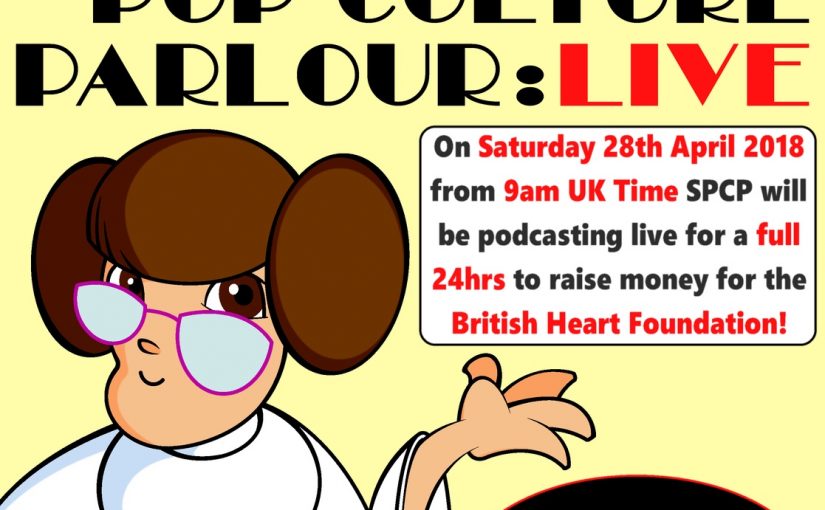 On Saturday 28th April, Stacey Taylor (host of Stacey’s Pop Culture Parlour) will be leading the fight against heart disease with a 24 hour charity podcast. The third SPCP Live Event will be co-hosted by Barry Nugent (of the Geek Syndicate podcast).

“Back in 2014, I was looking for something to do for charity that wouldn’t involve something as terrifying as throwing myself out of a plane or clambering down the side of a tall building, but would be enough of a challenge that people would part with some cash to support it. A friend suggested that I turn my monthly podcast into a live endurance event: 24 hours of non-stop Stacey chatting, with guests, interviews and competitions! Thus, Stacey’s Pop Culture Parlour Live (#SPCPLive) was born”, explains Stacey.

The duo will be chatting all things telly, comics, books, music, video games and more, as well as being joined by guests from the world of pop culture to keep them company. The event will be broadcast live from Stacey’s home in Great Barr to raise money for the British Heart Foundation (BHF).

“Both my mum and my brother were my heroes, so when Stacey asked me which charity we could support for this event it was a no brainer for me” explains Barry, who suggested the British Heart Foundation as the beneficiary as he sadly lost his mum and eldest brother to heart disease. “It’s especially important when you see some of the scary stats around heart disease.”

Stacey said “I knew that the BHF was the perfect choice, as in addition to Barry’s reasons, I suffer from a rare form of heart condition called Wolff-Parkinson-White-Syndrome which causes palpitations involving episodes of my heart pounding from between a few seconds to several hours. The resources from the BHF following my diagnosis were an invaluable source of information and anxiety-reducing comfort to me.”

“We hope to be entertaining, to highlight the work the charity does and raise money for a great cause.”

You can tune in from 9am on Saturday 28th April via mixlr.com/spcp-live and can donate before, after or during the show to help us do our bit to combat heart disease at www.justgiving.com/spcplive3

The British Heart Foundation funds vital life saving research preventing, diagnosing and treating heart and circulatory disease including connected conditions such a stroke, vascular dementia and risk factors such as Diabetes. Help us to help the BHF by either spreading the word about the event or donating whatever you can to it.