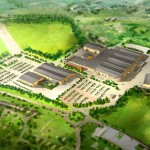 g of Harry Potter will open its doors for the very first time to visitors from 31st March 2012.

Tickets to the UK’s newest attraction are now on sale. Visitors must pre-book their tickets in advance by selecting specific tour times throughout the day via www.wbstudiotour.co.uk or through approved tour operators. Tickets will not be on sale at the attraction and spaces are limited.

Warner Bros. is also pleased to announce the inclusion of some of the film series’ most iconic sets within the attraction including the Great Hall, Dumbledore’s office, the Ministry of Magic, Harry Potter’s famous cupboard under the stairs, 4 Privet Drive, Gryffindor common room, the boys’ dormitory, the Potion’s classroom, Professor Umbridge’s office, the Weasley kitchen, the Hogwarts bridge and many others still to be announced.

The unique walking tour attraction will offer visitors the very first opportunity to journey behind-the-scenes and experience the magic that has gone into creating the most successful film series of all time. Visitors will be able to see firsthand the sheer scale and detail of the actual sets, costumes, animatronics, special effects and props used in all eight of the Harry Potter films.

“It was such a magical place to grow up,” says Daniel Radcliffe. “People will be amazed to see the incredible sets that we’ve worked in all these years.”

Rupert Grint adds, “The sets all have tiny little details that you may not always notice in the films but when you actually walk through them, you can see all the work that’s gone into it. It’s really amazing.”

“This is incredible, it’s been a long time coming and I’m very excited.” says Emma Watson.

Josh Berger, President & Managing Director, Warner Bros. UK, adds “For over 10 years the Harry Potter film series highlighted the exceptional creativity and craftsmanship that we have in the British film industry including groundbreaking special effects, incredibly detailed set design and breathtaking makeup and costumes. We are delighted that we can now open the doors to this world to the public at Warner Bros. Studio Tour London – The Making of Harry Potter and celebrate the extraordinary talent that goes into making major movies here in the UK.”

“The UK will be the focus of the world with the Olympic Games in 2012 and we are incredibly excited to be launching the UK’s newest attraction at this time,” adds Sarah Roots, Vice President, Warner Bros. Studio Tour London. “Visitors are going to be amazed by Warner Bros. Studio Tour London – The Making of Harry Potter and we look forward to welcoming people from all over the world through our doors from 31st March 2012.”

Warner Bros. Studio Tour London – The Making of Harry Potter will open 31st March 2012 with timed tickets available from 13th October 2011. Tickets are priced at £28 for adults, £21 for children and £83 for a family of four. Tickets must be booked in advance via a dedicated website www.wbstudiotour.co.uk or through approved tour operators.

Set in over 150,000 square feet, the tour will include some of the most recognisable and memorable film sets and props of all time allowing visitors to fully immerse themselves within the world of filmmaking and Harry Potter.

Within the iconic Great Hall visitors will walk on the actual solid York stone floor laid over 11 years ago. They will also marvel at the solid oak and pine house tables which were built for the films and then aged with axes and chains. Over the years, the Hogwarts pupils have taken upon themselves to carve in their own graffiti, which production designer Stuart Craig has encouraged, as this would happen in all schools! Visitors can also enjoy the unique house points bead system which is said to have caused a national shortage of beads when it was first installed in the year 2000.

Beyond the Great Hall, Warner Bros. Studio Tour London – The Making of Harry Potter continues with a huge selection of the most detailed and largest sets ever produced in the UK. Visitors can gaze closely into Dumbledore’s office and spot the authentic Sword of Gryffindor, Sorting Hat and Hogwarts headmaster portraits which adorn the walls.

Visitors will also discover the magic of green screen technology that has been used for the films including the many Quidditch matches. Also on display will be Harry Potter’s Nimbus 2000, Draco Malfoy’s Nimbus 2001 and Harry’s special gift from godfather Sirius Black, the Firebolt.

In addition to the green screen, a number of never-before-seen video pieces featuring interviews with the crew and cast will reveal the many secrets behind the filmmaking process. Visitors will also be able to appreciate the spectacular animatronics and make-up designs within the Creature Effects workshop. The workshop will feature iconic Harry Potter film creatures including Buckbeak the Hippogriff, Aragog, the giant spider, Fawkes the phoenix and the enormous Basilisk head.

The Weasley kitchen will showcase the incredible craftsmanship of the real life special effect props including Molly Weasley’s self-washing frying pan, knitting needles and chopping boards. And fans can celebrate Hogwarts’ loveable groundskeeper Hagrid by visiting the real Hagrid’s hut, view his famous motorcycle, and take a peek at the secrets of how the larger than life character was created on screen.

The Ministry of Magic will also feature in the Studio Tour, highlighted by the breathtaking Magic is Might statue as seen in Harry Potter and the Deathly Hallows – Part 1, designed by Stuart Craig to be reminiscent in style of soviet sculptures from the 1930’s highlighting the dominance of the wizarding world over Muggles.

In addition, visitors will be able to enjoy one of the most famous addresses in the world, 4 Privet Drive, as well as the legendary cupboard under the stairs.

The Gryffindor common room is one of the films’ oldest sets and remains one of the most loved by fans. This iconic set will feature alongside the Gryffindor boys’ dormitory which includes the original beds made for Harry, Ron, Seamus, Neville and Dean for the first film. Over the course of filming, as the cast grew from young boys to teenagers, filmmakers were required to find unique camera angles to hide the fact that the cast had clearly outgrown the beds.

Other Hogwarts sets on show include the dark and mysterious Potion’s classroom, the lair of Professor Snape, and Professor Umbridge’s office resplendent in pink with the incredibly detailed hand painted cat porcelain plates each made especially for the films.

The gateway to the school itself, the Hogwarts bridge, last seen burning to the ground following Neville and the Death Eater’s chase in the final film, will be restored for all to see as will hundreds of props, costumes, animatronics