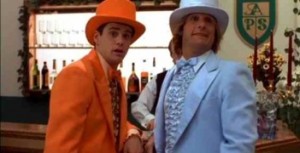 mb and Dumber sequel since 1994, but nothing ever came of it. (forget the dire 2003 prequel).
But apparently, those whispers are now getting louder. The Farrelly brothers are currently doing the press rounds, for The Three Stooges. In one of those interviews, they confirmed that there will be a Dumb And Dumber 2.

The film starts shooting in October and is being touted for a Summer 2013 release. Welcome back, boys.